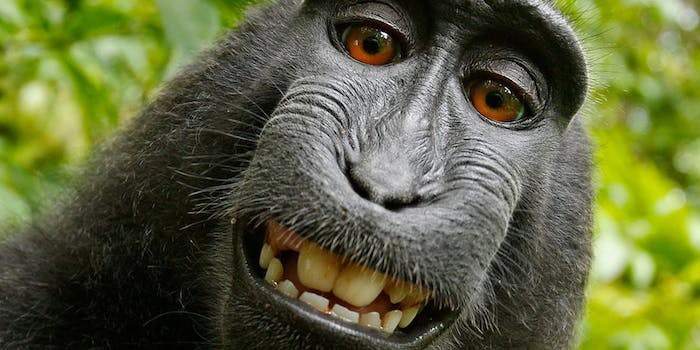 How are we still debating this?

Barely a fortnight since much of the Internet was happy to angrily weigh in on whether a photo taken by a monkey, of said monkey, could be copyrighted, the U.S. has made a decision.

Of course it can’t. Are you kidding?

This is according to the U.S. Copyright Office’s third edition of Compendium of U.S. Copyright Office Practices, a draft of which was released Tuesday. Those guidelines don’t come out often: The previous ones were published in 1973 and 1984. And while it’s long been the office’s opinion that “‘authorship’ implies that, for a work to be copyrightable, it must owe its origin to a human being,” only now does it clarify the role of a monkey-taken photo.

Specifically, “a photo taken by a monkey,” “a mural painted by an elephant,” and “driftwood that has been shaped and smoothed by the ocean” are all created by natural elements, and thus can’t be copyrighted, according to the new, 1,200-page guidelines.

That is unfortunate for photographer David Slater, who says he spent days in Indonesia letting macaques play with his cameras before one snapped a selfie for the ages, which quickly went viral. Slater unsuccessfully petitioned the WikiMedia Commons to take down the photo, disagreeing with his claim that he owned the copyright to it. However, WikiMedia did not argue, as some have alleged, that the monkey itself owned the copyright. Instead, the organization said, it exists in the public domain.