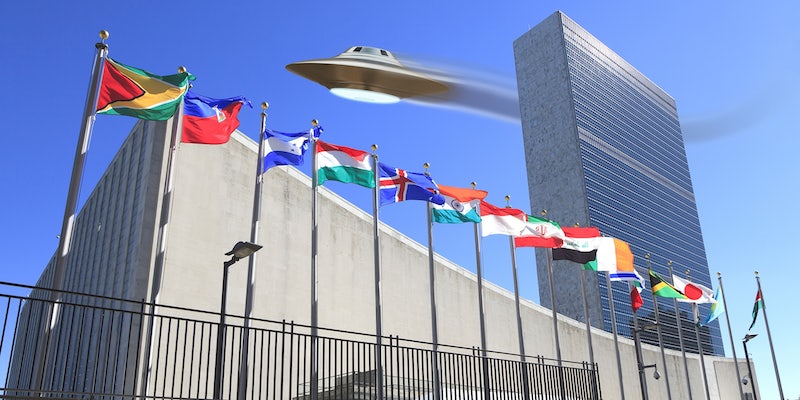 The British hated the idea.

A series of leaked U.S. State Department diplomatic cables from 1978 have revealed how the United Nations almost set up a committee to research alien and UFO sightings.

The initiative was forwarded by Prime Minister Sir Eric Gairy, whose administration ran the tiny Caribbean island of Grenada. Gairy had a deep personal interest in extraterrestrials and UFO encounters, proposing to the U.N. that a formal investigatory committee be organised.

One classified cable humorously describes Gairy as “undaunted by a lack of response” to his committee idea, having “laid the groundwork for a blitzkrieg sales pitch which will include a cast of supporters ranging from scientists to astronauts, supplemented by a Hollywood film production.” The cable goes on to request instruction as to what the formal U.S. position would be on this.

The document is one of many in an enormous cable dump published in 2015 by WikiLeaks. Consisting of over half a million official correspondence documents, the leak not only offers a behind-the-scenes look at the important geopolitical events in 1978 but also exposes the U.S. government’s interest in the Grenadian committee resolution.

Grenada was only granted independence from the United Kingdom in 1974, and it appears that the British were less bemused than the Americans by Gairy’s U.N. crusade. Files from the U.K’s national archives show that the embarrassed British were concerned a UFO committee would disgrace the U.N.

“The British delegation does not think that the establishment of an agency for research into unidentified flying objects is appropriate to the functions of the United Nations,” the British government wrote, adding, “Hopefully, a confrontation with the representatives of Grenada can be avoided, but the U.K. should not hesitate to make its views known as and when appropriate.”

As history goes, a confrontation with Grenada would not be necessary. Gairy’s resolution was quietly abandoned when he was overthrown in a 1979 political coup.

The spirit of Gairy’s long-forgotten project, so it seems, is far from politically dead.