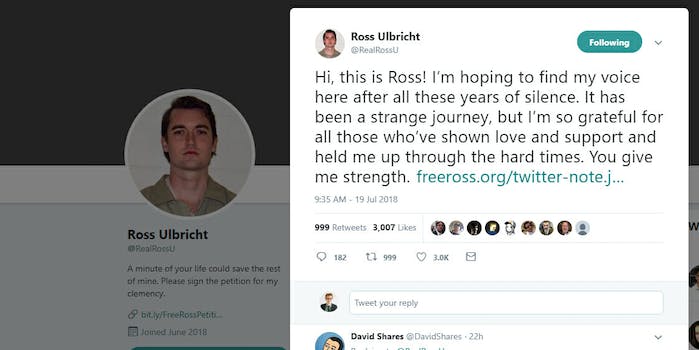 It's Ulbricht's first communication with the outside world.

In a note posted with his first tweet, Ulbricht said he has not sure what he will end up tweeting about, but hoped the account would help him connect with people while serving his time in prison.

“It’s coming up on five years that I’ve been in prison though, so I’m hoping this will help me feel more connected to the outside,” he wrote.

Hi, this is Ross! I’m hoping to find my voice here after all these years of silence. It has been a strange journey, but I’m so grateful for all those who’ve shown love and support and held me up through the hard times. You give me strength. https://t.co/x4m6J3lgha

Ulbricht, who went as Dread Pirate Roberts on Silk Road, was convicted in 2015 on a number of charges stemming from is involvement with the dark web community. He faced a maximum of life in prison and is serving two life sentences in New York.

In June, the Supreme Court refused to consider Ulbricht’s appeal to overturn his life sentence, as Reuters points out.

The Silk Road was the first modern black market online using the dark web. It was shut down in 2013. A similar website, Alpha Bay, was taken down last year as part of an investigation by the Department of Justice, Federal Bureau of Investigation, Drug Enforcement Administration, and EuroPol.