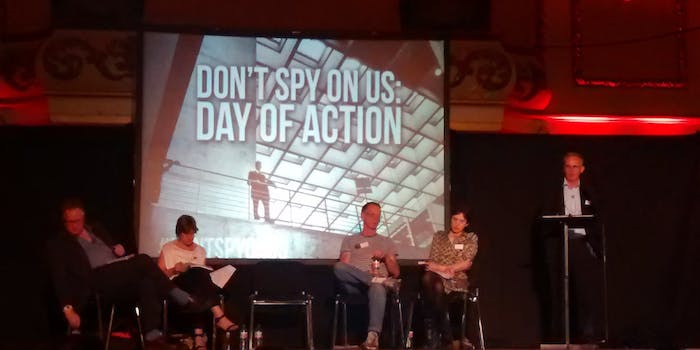 Inside Don’t Spy on Us launch, the ‘biggest privacy event of 2014’

If the U.K. adopts better privacy laws, the launch of Don't Spy on Us is where it all started.

This weekend, a year after Edward Snowden’s historic revelations made clear the true extent of the modern surveillance state, a coalition of civil liberties groups assembled in London to kickstart a campaign denouncing blanket spying and calling for changes in U.K. law.

Liberty, Privacy International, Article 19, Big Brother Watch, English PEN and Open Rights Group have come together to form the “Don’t Spy On Us” coalition, which aims to “defend privacy, free expression and digital rights in the U.K. and Europe.” The conference was held in Shoreditch Town Hall, with actor and comedian Stephen Fry, who kicked off the day’s proceedings via a pre-recorded message to the event’s 500 attendees, describing the actions of GCHQ as “squalid and rancid”.

The actor was unable to attend personally due to a Tony Awards nomination—he didn’t win, alas—but numerous other public figures, experts and influential voices were on-site for what was billed as “the biggest privacy event of 2014.”

Fry was introduced by blogger and activist Cory Doctorow, who warned the U.K. risked “Huxleying [its] way into the full Orwell,” before Guardian editor Alan Rusbridger took to the stage to recount his personal experience of working on the Snowden revelations: “the most extraordinary period I’ve ever lived through.”

Discovering the extent of government surveillance “[has] shaken me out of a high degree of complacency that I realized I had,” Rusbridger said. He added that throughout the initial “frenetic” reporting, “paranoid” expectation grew “that at some point, something bad was going to happen.”

These fears were realised when the U.K. Government demanded that the Guardian destroy all copies of the files in London—despite their existence in multiple forms overseas—forcing surreal scenes of Rusbridger destroying hard drives in the Guardian’s basement with an angle grinder, as secret service agents observed the demolition. This was, Rusbridger said, a “catastrophic” that meant the U.K. government “lost any handle on the story at all.” 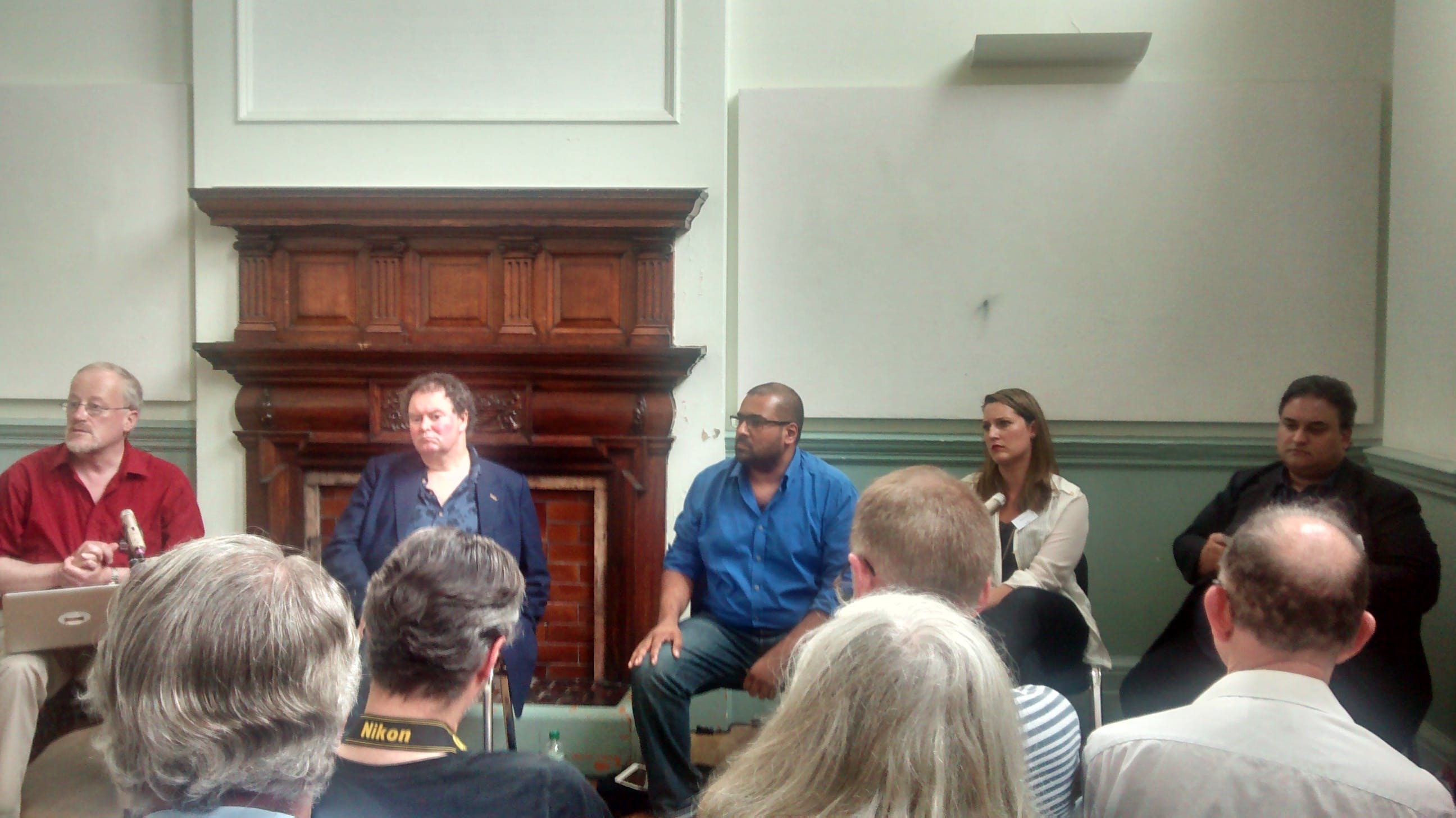 The Daily Dot talked about the initial leaks with Ewen MacAskill, who alongside Glenn Greenwald and Laura Poitras was responsible for the early reporting on the Snowden Files. He said his initial reaction—like Greenwald’s—was one of complete surprise; both journalists expected someone far older and more senior than the 30-year old Hawaiian that met them in Hong Kong.

Freedom of the press was discussed extensively at the event. Rusbridger criticized the U.K.’s lack of strong free speech laws compared to the U.S., saying, ”there is no really established right to privacy because there is no constitutional protection of free speech.” Later in into the conference, veteran investigative journalist Duncan Campbell argued that mass surveillance amounts to “a real existential threat to journalists” due to its potential to violate source protection, and that cryptographic tools today still fall far short of the standards desperately needed.

The event also including a round table discussing the future, a discussion about possible changes in law, and “cryptoparties” aimed at teaching attendees the basics of cryptography.

The shifting meaning of privacy came up time and time again in the course of the afternoon. Prof. Richard Aldrich of the University of Warwick, opined that “privacy is on life support—and it’s dying.” Meanwhile, Carly Nyst, the legal director of Privacy International argued that privacy is the “right to chose who has your information and how they use it.”

Throughout the day—as one might expect at a technology conference—tweeters were prolific, using the hashtag #DontSpyOnUs, which has since become a digital rallying cry for privacy advocates on Twitter.

Mass boycott of US companies most efficient way to force US legislators to tackle spy programme, acc to experts at #DontSpyOnUs

Shami Chakrabarti: There have been crime scenes in millions of UK homes but we don’t allow gov’t surveillance in all homes. #DontSpyOnUs

.@schneierblog “it’s true that all the NSA ‘reforms’ proposed so far throw foreigners [non-Americans] under the bus” #DontSpyOnUs

If you have nothing to hide: You are probably both boring and privilaged #DontSpyOnUs

After further sessions, including discussions about freedom of the press in the U.K. and additional cryptoparties, the event drew together with a closing panel including Wikipedia co-founder Jimmy Wales and Liberty director Shami Chakrabarti, debating the “fight back” against surveillance.

Talking to the Guardian, Wales called for a American-style “First Amendment” to protect whistleblowers and reinforce press freedoms.

“One of the big differences between the U.S. and the U.K. is the First Amendment, so the idea of smashing computers in the basement of the New York Times is basically inconceivable,” said Wales. “Something like the First Amendment and the rest of the Bill of Rights is very difficult to change,” he added, “whereas [in the U.K.] … Parliament can ultimately change anything with a majority vote and that’s that.” 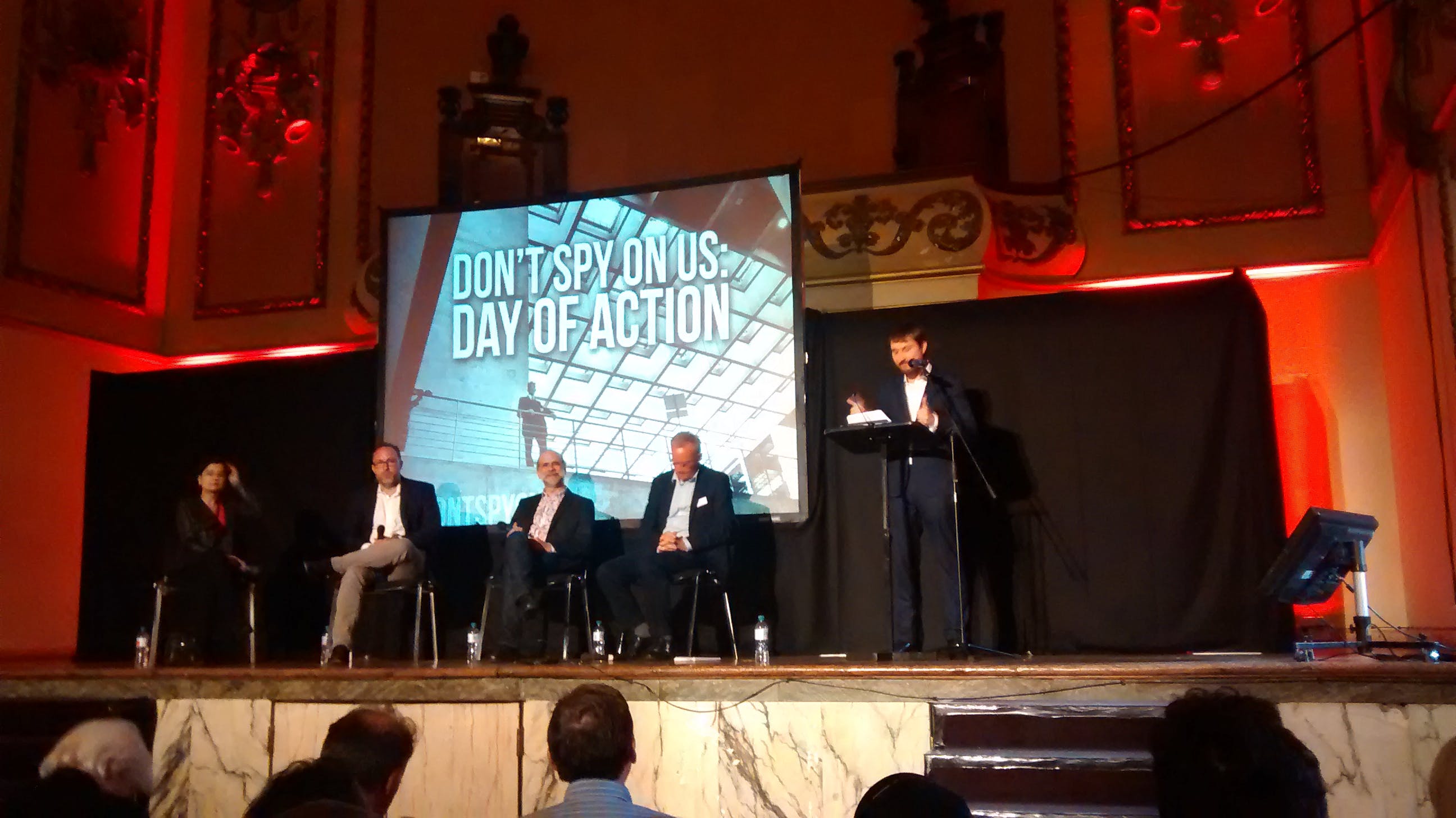 All said, the day was full of impassioned speeches and calls to arms. MacAskill summed up the event, saying that the attitudes of both the U.K. government and the Obama Administration are in “desperate need of change.” His point was punctuated by Chakrabarti, who persuasively argued that “we’re at a pivotal turning point where people are starting to care about this.”

All photos via Rob Price