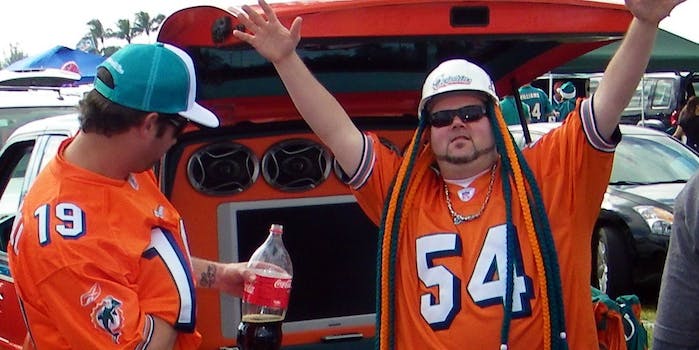 Too bad you have to watch the Dolphins.

If one of Uber’s primary missions is to make sure people don’t drive drunk, it’s going to be creating its own clientele this NFL season. The ride hailing service is partnering with the Miami Dolphins to offer tailgating experience before games.

The partnership, dubbed UberTailgate, provides an on-demand tailgating experience for a limited number of fans outside Miami’s Hard Rock Stadium (no, seriously, that’s the name) starting on Sept. 25, 2016 before the Dolphins’ first home game against the Cleveland Browns.

Uber reserved 20 tailgating spots before each home game, which fans are able to reserve for $250. The service will pick up users and drop them off at the designated tailgating spot, which is furnished with a tent, picnic table, cooler with ice, charcoal grill, and grilling utensils.

Not included in that bundle is the actual food to put on the grill or drinks to fill the cooler. Fans can bring their own, or pony up for Uber’s own “provisions store” that will charge you prices that only look reasonable compared to the cost for concessions inside the stadium.

Four hamburgers and buns costs $16, nachos and salsa runs $17, and a six-pack of domestic beer goes for $18 (or $21 for an imported drink), among other food options.

Trips to and from the game come with a $15 ride credit, so fans will have to pay the difference once the fare runs past the $15 mark.

For those willing to fork over the cash for the tailgating experience, UberTailgate may be worth the convenience and novelty factor. There’s just one major downside to the service: you have to watch the Miami Dolphins.