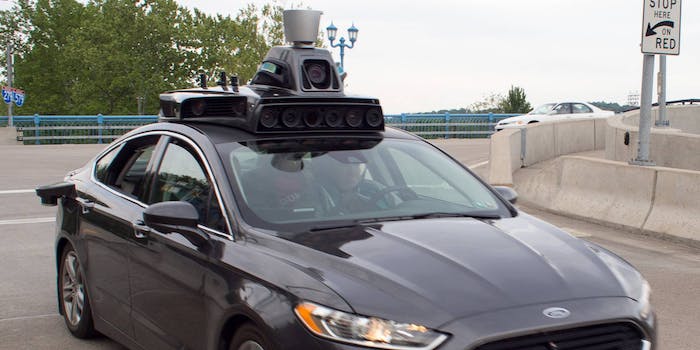 Drivers aren't quite out of the picture yet.

Starting today, Uber passengers in Pittsburgh can get into the passenger seat of a car with no driver. September 14, 2016 marks the first day of the ride sharing company’s test of its fleet of self-driving vehicles.

The experiment will put modified Ford Fusions–decked out in sensors, cameras, and lasers to map data and monitor its surroundings—on the roads of the Steel City. The rides will be assigned at random to prospective passengers looking for a lift.

The cars won’t be making the pick ups and drop offs all on their own; a driver, who can take the wheel if needed, and observer will be placed in the front seats of the vehicles. So riders will still need to be prepared to make small talk on the ride.

Several news publications received ride-alongs with Uber on Tuesday to test out the autonomous cars before they were made available to the public.

Reuters’ Heather Somerville reported the car was able to “safely – and for the most part smoothly – stop at red lights and accelerate at green lights, travel over a bridge, move around a mail truck and slow for a driver opening a car door on a busy street.”

Reuters said the car was able to achieve the safe trip “all without a person touching the controls,” but noted, “the Uber driver and the engineer in the front two seats did intervene every few miles.”

Signe Brewster at TechCrunch said the Uber driver had to take over “whenever a stopped vehicle blocked an entire lane” because the self-driving car is not yet equipped to make that action, but said, “there were plenty of other instances to see it respond to its surroundings.”

New York Times reporter Mike Isaac said it wasn’t uncommon for the driver to take the wheel on his ride, too, but “in self-driving mode, turns and stops were near seamless, and I often had to check in with my driver to see whether he or the computer was steering the car.”

The consensus seems to be the cars are impressive when in action, but often interrupted. Those interruptions are likely to become less and less frequent as the computer system controlling the car improves in its function.

It wasn’t that long ago that there were no Ubers on the road. Now they’re everywhere, with drivers ready to give rides on demand. It won’t be too far in the future that autonomous cars are a common sight as well. Uber will just have to remember to program them not to unionize.