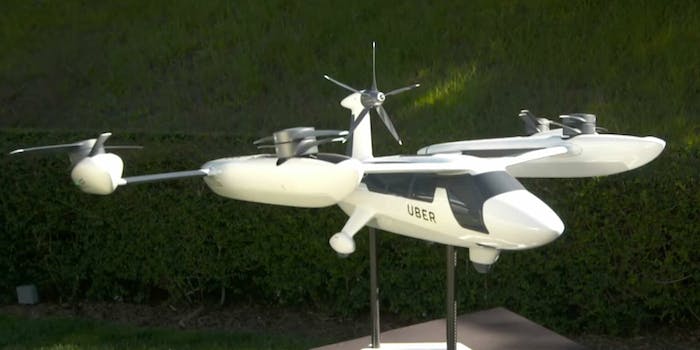 Here’s what Uber wants its flying taxis to look like

The company wants to start testing by 2020.

Uber has been talking up its flying taxi program for years, and now we finally have an idea of what its futuristic vehicles will look like.

The company gave us a first look at the design models for its forthcoming air taxis on CBS This Morning. The vertical takeoff and landing (VTOL) vehicle, which looks like an oversized commercial drone, uses several different rotors to create both upward and forward thrust. Jeff Holden, Uber’s chief product officer, explained the flying taxi lifts off much like a helicopter but has two additional rotors to help it move forward.

Uber CEO Dara Khosrowshahi told CBS This Morning that he’d like the taxis to accommodate four passengers to help make them affordable for “normal people.”

“Part of what makes this company great is that we take big, bold bets,” Khosrowshahi said. “That’s part of the norms and the culture of this company and this is another big, bold bet that we think ultimately is something that the cities of the futures are going to need.”

Uber wants to start testing its air transportation service, Uber Elevate, by 2020 in Los Angeles, Dallas, and Dubai. It plans to open its service up to the public by 2028, when it envisions flying taxis dropping off and picking up passengers from “Skyports” on skyscraper rooftops. Uber says each Skyport could accommodate 200 takeoff and landings each hour. Uber previously released a video showing how its service will work much like the ride-hailing platform does today.

Before Uber takes to the skies, it will need to figure things out on the ground. The company is currently investigating a fatal crash between one of its self-driving cars and a pedestrian in Arizona. Khosrowshahi confirmed a previous report from the Information that revealed the crash was likely caused by a software problem.

We expect Uber to release more information about its flying taxis this week at its Elevate Summit.