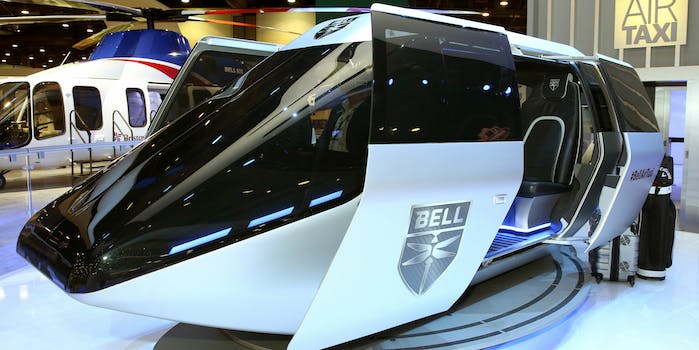 I lean over to look out the window at the sprawling metropolis glowing below me. I’m sitting in a small, ultra-modern cabin with three other people wearing virtual reality headsets. A few minutes later, we gently drift down to our destination and back to the real world.

As expected, my flying taxi tour from the lens of an HTC Vive was an ideal scenario. There were no delays and nothing was blown off the skyscraper when we took off. The vehicle’s propellers only made enough noise to remind me where I was, and wind friction never caused the helicopter to bounce or sway. Also, no one on the ground got sliced in half by a falling hubcap. For all the technical challenges flying taxis face, this digital simulation was utterly perfect.

The experience at SXSW wasn’t another attempt to convince people to give VR a chance. But rather, it aimed to persuade us that flying taxis aren’t just a pipe dream, but an inevitable next step in transportation. If there’s one takeaway from the half dozen flying taxi sessions at this year’s conference, it’s that earning the public’s trust is proving more difficult than perfecting the technology. VR is a clever way to bridge reality with what is still an imaginary concept.

The VR trial was created by Bell, an established aerospace company out of Dallas that showed off its concept “air taxi” on Tuesday at a special event in Austin, Texas. First unveiled at CES in February, the gorgeous electric virtual take-off and landing (eVTOL) vehicle is designed to operate in Uber’s future aerial fleet.

If you’re not familiar, Uber launched an “Elevate” program to develop an urban air platform as the next form of transportation it offers. It hopes to alleviate road congestion by building a network of “Skyports” where contracted EVOLs will launch from.

As we’ve seen with autonomous electric vehicles, the interior of Bell’s four-passenger vehicle focuses on entertainment, not the driving experience. Screens are everywhere, ready to bring you whatever on-demand service you want at the touch of a button. If it can keep you busy and comfortable, you might not feel terrified floating hundreds of feet in the air in what is essentially a high-tech bobsled.

Bell is hoping to launch a commercial vehicle in the next decade after preparing a demo version by early 2020.

The company only brought the cabin of the aircraft to SXSW so as not to reveal the secrets behind its mysterious propulsion system. There were no wings, no motors, no propellers—nothing that could ever move me an inch off the ground, and away from the realities of our strained infrastructure.