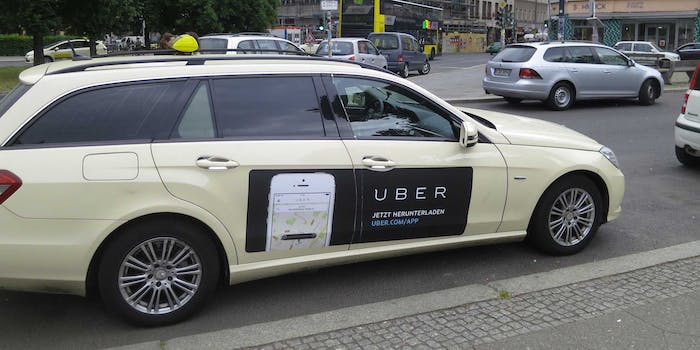 Photo via Alper Çuğun/Flickr (CC BY 2.0)

Guess these drivers weren't part of the survey.

81 percent of Uber drivers are satisfied with their overall experience working for the ride-sharing company. That’s the bit of information Uber prefers headlines the results of a recent survey conducted by the company, though the figure shouldn’t be a surprise—Uber paid for it.

The popular ride-sharing app has continued to grow—both in riders and in drivers—over the course of 2015, despite a rash of controversy that reappears on the regular. The company now counts 400,000 drivers as active, over double the amount acting as on-demand taxis last year. Uber reports those drivers (referred to regrettably as “driver-partners”) have been paid over $3.5 billion in the U.S.

Uber, which dropped a couple more bucks in the pockets of those willing to take a survey for the company, notes that 833 drivers were questioned.  According to the methodology provided by Benenson Strategy Group—the polling organization that conducted the survey–they were provided with “a financial incentive” for their responses.

Unsurprisingly, the results are extraordinarily positive; a whopping 97 percent of responders are satisfied with the flexibility of their schedule, while 91 percent like the work-life balance they get from it. Respondents also overwhelmingly say they chose Uber because it works for them, not because they don’t have any other job prospects.

The questions posed in the survey were ones that would make it rather     difficult to paint a negative picture of Uber. Most of the topics covered in the polling dealt with demographics and had the company’s self-interests at heart—a theme that has become common in Uber’s dealings with its drivers. This isn’t surprising considering no company would be interested in releasing survey results that paints itself in a negative light, but it’s also a shameless exercise in a company patting itself on the back.

Ask actual Uber drivers their thoughts on the survey and you’ll find a survey of two thousandths of a percent might not be as representative of the 400,000 total driver-partners as Uber might suggest.

“No one in their right mind would answer this correctly if they weren’t happy [with] Uber for fear of being deactivated,” one driver wrote on UberPeople.net, a favorite gathering place for ride share drivers.

That same fear of repercussion, despite the promise of anonymity from Uber, impacted results of the company’s survey last year, as well. According to Newsweek, just 11 percent of those prompted to answer the questionnaire actually responded. Drivers expressed concern that their accounts would be frozen if they answered questions negatively.

A poll created on UberPeople found a much higher dissatisfaction mark with the company, while a poster called Uber’s own survey “nonsense,” adding that it was “Uber speak” as a way to say, “more we cut the rates, happier drivers become,” a reference to Uber’s recent decision to slash rates—and, in turn, wages—in a variety of markets.

On the /r/UberDrivers subreddit, there is plenty of additional doubt surrounding the results.

“They sure as hell didn’t ask me,” said one user who described themselves as, “neither satisfied nor unsatisfied.” One redditor even suggested Uber might use short surveys sent to drivers to pick and choose their subjects for its larger research efforts.

“This reminds me of a 2 question survey they sent me about 6 months ago. They simply asked if I was satisfied as a driver, yes or no, and then if I was willing to talk to the media or another firm about my experiences. I answered no, and yes I’d be willing to talk about it. Never heard another word from them. I suspect they have a list of ‘happy’ drivers that they give to places to do these surveys,” the user wrote.

Perhaps more telling than who wasn’t asked is what wasn’t asked; Uber asked about overall driver satisfaction, but didn’t bother posing questions about topics like earnings, which it did collect in last year’s version of the survey. A third-party survey conducted by SherpaShare may explain why Uber avoided that line of questioning this time around.

Research conducted earlier this year by Request For Startups found that the average rideshare driver spends about $965 per month on car-related expenses. Assuming a 40 hour work week for that figure, the adjusted hourly wage for a driver drops to between $8 and $12—and that’s still before taxes are accounted for.

Over two-thirds of respondents to Uber’s survey said they are new to the world of professional driving, suggesting that keeping drivers at such wages is difficult. A survey conducted by Uber last year found the burnout rate is high for drivers: 11 percent quit after one month, and nearly half are gone within the first year.

Uber’s survey doesn’t have much of interest to say about the company or its drivers’ actual experiences. That is probably to be expected, but it’s also unfortunate to see an actual opportunity to gain insight into a “startup” with a true impact on local and national economies instead turned into paid-for advertising.

Uber will happily tout the 81 percent satisfaction rate its drivers gave it, but if the company were an Uber driver itself, a rating that low would prompt its account to be deactivated.