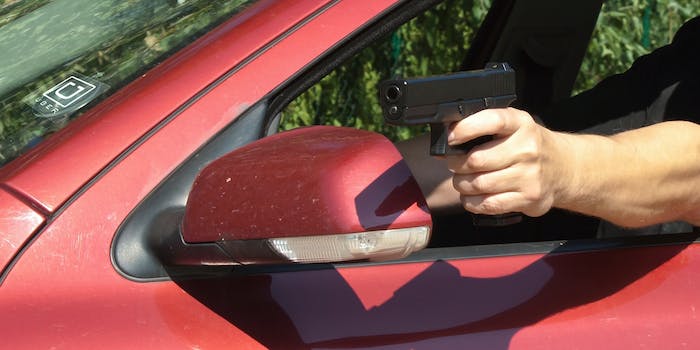 The driver has a license to carry a concealed weapon, and hasn't been publicly identified.

Early Sunday morning an Uber driver shot and killed an armed attempted robber in Aventura, Florida, while taking a passenger to the airport.

According to the Miami Herald, the shooting occurred around 5:50am ET when a Dodge Caravan minivan cut off the Uber on an access road next to a causeway.

After an armed man then emerged from the van and “demanded items” from the driver, the driver shot the would-be robber four times, killing the gunman. The driver has a license to carry a concealed weapon, and hasn’t been publicly identified.

“And a male jumped out of the caravan with two guns in his hand and he pointed them at the Uber driver who also had a fire arm and his car which he was permitted for. He shot the suspect on the scene who is later pronounced deceased,” Aventura police spokesman Chris Goranitis said.

The gunman’s accomplice then sped away in the minivan, which was later recovered by police. The driver and passenger left the scene uninjured, and were interviewed by police, along with a person of interest.

An Uber spokesperson told the Daily Dot that Uber is aware of the story and that the matter is currently under review.

Questions regarding Uber’s policy on guns were directed to the ride-hailing company’s legal policies page, which states riders and drivers are prohibited from carrying firearms while using the service. The policy, however, is only applicable to the extent of the law. In Florida it is legal to carry a concealed weapon or firearm in a car with a license.

Because of Florida’s “Stand Your Ground” laws, which allow a person to use deadly force in self-defense (and made national headlines during the Trayvon Martin case against George Zimmerman), police said they do not expect to file charges against the driver.

Floridian Uber drivers experienced a variety of wild rides over the course of 2016 alone. Earlier this year a doctor lost her job after a video of her attacking an Uber driver went viral, and a man was arrested after he robbed and threatened to infect an Uber driver with HIV.