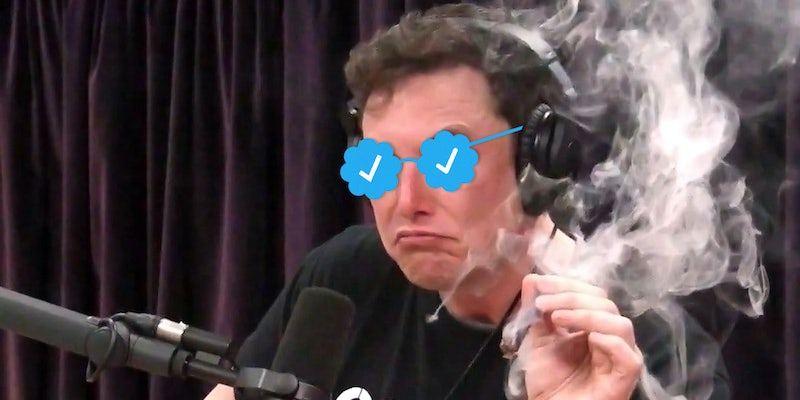 Twitter users will soon have to pay for blue checkmark verification, according to a new report in the Verge. This move comes in the midst of major upheavals after Elon Musk‘s takeover, with Twitter’s former CEO and CFO leaving the company, and Musk reportedly planning mass layoffs.

The idea of paid verification is already making waves, not least because the price is so high. Verification is currently free, although users can pay $4.99 per month for the premium service Twitter Blue, offering extra features like bookmark folders. According to the Verge, Twitter is planning to fold verification into Twitter Blue, upping the price to $19.99 per month. If verified users don’t subscribe within 90 days of launch—which will supposedly come as early as Nov. 7—then their checkmarks will be removed.

Twitter hasn’t commented yet on this report, although Musk tweeted on Sunday that “The whole verification process is being revamped right now.” At any rate, the concept of paying $20 per month for verification is inspiring a pretty negative response. It also suggests that Twitter’s new management is scrambling to find new ways to make the company profitable.

Reactions are split between concerns about misinformation, and open derision at the idea of paying for verification. If Twitter goes through with this plan, then the blue checkmark gains a new meaning: The account holder is voluntarily paying $20 per month for what many users see as a pointless status symbol. It’s inherently cringe. At the same time though, verification serves a practical purpose. By making it a subscription-only service, Twitter would sabotage its utility as a safety measure.

A monthly fee is no big deal for major brands like Starbucks or public figures like Taylor Swift. The real issues kick in lower down the foodchain, particularly among journalists and local political candidates. Blue checkmarks allow Twitter users to know at a glance that these accounts are legit, combating impersonation and the spread of fake news. However a $240 annual fee is prohibitively expensive to many—even journalists working for major news outlets, because verifying an entire newsroom plus freelancers really adds up.

Coupled with Musk tweeting out a far-right conspiracy theory about Nancy Pelosi’s husband this weekend, there are already widespread concerns about misinformation flourishing under Twitter’s new leadership.

This paid verification model buys into the idea of blue checkmarks as a status symbol that users will pay to enjoy, ignoring the ways in which verification makes Twitter safer to use. In reality, this service exists to prevent impersonation, a problem that isn’t just restricted to brands and celebrities. Some users need to be verified because they’re targeted by harassment campaigns or plagiarists. Others have more banal reasons, like needing to differentiate themselves from people with the same name. By treating verification as a premium service rather than a safety measure, Twitter opens up the potential for abuse, showing little understanding of how the site actually works.