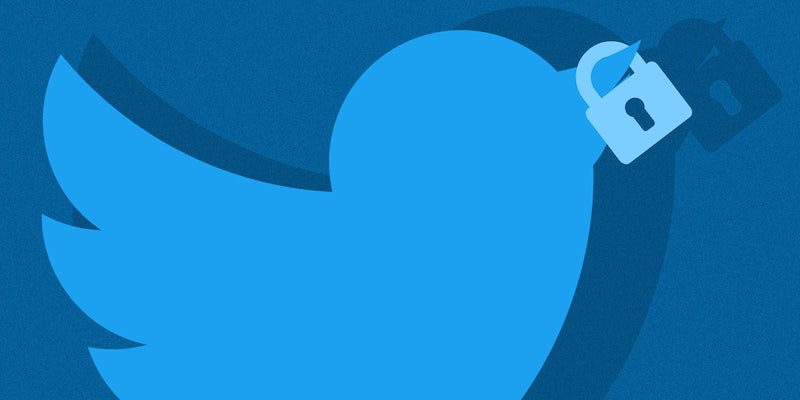 They don't achieve much.

On April 6, I was out celebrating a friend’s birthday when I received an email from Twitter support (on a Saturday night, no less) telling me I’d been suspended for a week and would have limited functionality.

I’d be able to log in, read tweets, and send and receive direct messages. But I wouldn’t be able to post for the next seven days, nor could I retweet or like posts.

The offending tweet, which Twitter helpfully allowed me to delete immediately, was one in a reply from nearly a week earlier. It was deemed as “encouraging self-harm,” for telling someone to take a large amount of the antipsychotic, Thorazine, though that wasn’t the intention, and it’s clear that nobody else thought so either since it took days for anyone to be offended.

Also, “death” isn’t actually a symptom of a Thorazine overdose.

It’s possible that the tweet was mass-reported by conspiracy theory believers since I write so much about the QAnon conspiracy theory. Or maybe it really bothered someone. No matter the case, I was the latest person to fall victim to Twitter’s apparently arbitrary application of its rules for locking and suspending accounts.

Because I’ve reported many tweets. Most haven’t resulted in the slightest thing happening to their posters. My tweet certainly wasn’t any more inflammatory than this one, which I unsuccessfully reported to Twitter for indicating that unspecified people with my last name should skinned:

Or this apparently inoffensive one, which told me that the “day of the rope,” a popular concept in white nationalist literature where journalists are wholesale executed, is approaching:

Speaking of hanging, here’s a tweet that violated no rules despite telling me: “the world wants to see your neck stretched:”

Though this tweet, which ordered me to “prepare for the gallows,” was indeed found to be offensive and got its owner’s account locked.

What is the difference between “you are about to be hanged,” “the world wants you hanged,” and “prepare to be hanged?” Twitter support didn’t respond when I asked them, because I honestly don’t know. Does anyone? They sure seem not to.

Regardless, I’d been suspended for my tweet. I immediately appealed but expected nothing from it, and indeed, I also heard nothing back about it. And just like that, I’d been removed from the community I interact with the most online.

While almost entirely made of people I’ve never met, my Twitter social circle matters to me, and I matter to it. People started asking where I was, and I couldn’t respond. I was working on stories and couldn’t tweet at people to ask them to follow me so I could direct message them. I couldn’t weigh in on topics in my field of expertise, nor could I fight back against organized trolling attempts.

I was silenced. And it’s clear from conservative rhetoric on social media, I’m not the only person who’s had their voice temporarily stifled, and feel they’ve been censored.

The modern conspiracy theory movement is almost entirely an online phenomenon. It’s made of people who rarely, if ever, interact in person, but spend hours at a time reading, sharing, and “researching” material that purports to show them “the truth” about what’s really going on in our society and politics. These online circles are real and important to the people who are in them, serving as alternate communities and even a kind of family.

One can see these communities at work in the explosive growth of the QAnon conspiracy theory, where throngs of baby boomers in Q merchandise swamp Trump rallies to the point of the Secret Service barring them from entering. It’s also at work in groundless fear over chemtrails in the sky poisoning their bodies, 5G internet warping their brains, and cadres of powerful financiers and politicians controlling their destiny.

My aunt shared a fake science video and now I'm in her facebook mentions trying to tell all her boomer friends not to microwave rocks because they can hurt themselves and WHY DO MILLENIALS HAVE TO BE THE MOMS TO OLD FOLKS?!

These communities, while propagating some of the worst abuses of critical thinking, also serve as a lifeline to the outside world.

It’s one of the reasons why conservative fears over Twitter “shadowbanning” and censorship on platforms like YouTube are such a common grievance: It’s not just reducing their brand viability, it’s literally cutting banned or limited users off from their social circles. It’s social dislocation at its worst.

I’d never put much credence in these claims since many of the people making them have actually tweeted things that were either dangerous conspiracy theories or straight-up abusive. But when I was locked out of my Twitter account under dubious circumstances, I understood why conspiracy theories about Twitter censorship and “shadowbanning” have so much traction.

The suspension was disproportional, seemed to be at random (or even worse, the work of trolls actively working to silence me), and my appeal ignored. Of course, I felt censored. Of course, I wanted to blame Twitter for the seemingly arbitrary policies that were aimed at me.

And of course, I thought the people who were on the opposite end of the spectrum of my reporting were to blame.

And yet, I also realized that to cry “censorship!” and “First Amendment!” would be at odds with how I fundamentally approach social media. It’s their playground, not mine, and they can kick me out of it for any reason they deem to violate their terms of service. That those terms are nebulous and often seemingly contradictory isn’t relevant to the fact that they are, in fact, theirs.

So much of the grievance on social media is based on a misdirected application of how free speech works, and I didn’t want to add to that noise. So I kept silent, DM’ed a few people to help share a story I’d written, and moved on with my life. Until the moment my suspension lifted, of course, when I immediately explained what happened.

We’ve seen over and over how major social media networks and content aggregators are struggling to keep up with the onslaught of conspiracy theories, racism, anti-Semitism, extremism, misogyny, abuse, and threats that their services are overwhelmed with.

YouTube’s algorithm puts an endless buffet of conspiracy theory videos at one’s fingers, while Twitter is overwhelmed by white nationalists and incels, and Facebook is a petri dish for fake news. Users beg for fewer Nazis, more tools to report abuse, more consistent moderation. And they get nothing but vague promises for changes in the future, and suspensions that don’t change anyone’s behavior.

And if you get pinched, realize that you’ve been caught in a system that’s run by people who are perpetually in over their heads.

Even if they still need to do better.