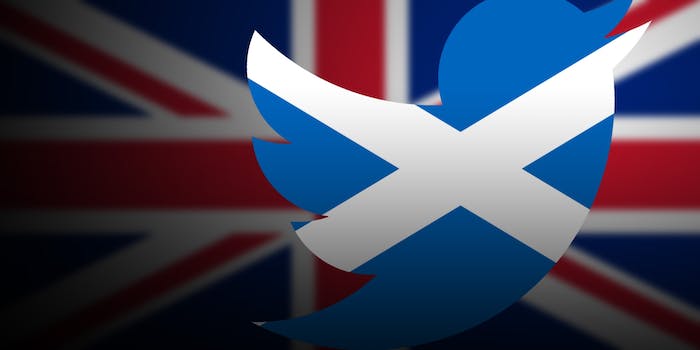 Is it going to be a walk-over after all?

The Scottish independence referendum is drawing in to its final hours, and the result seems too close to call. Opinion polls conducted during the last days of the campaign has put the Yes and No camps neck-and-neck—and the lack of any exit polling means the formal result won’t be known until all the votes are counted in the early hours of the morning.

Or will it? Where exit polls have failed us, Twitter has stepped in—and if it’s any indication as to the reality, it’s going to be a landslide.

An analysis of hashtags tweeted over the past 30 days reveals that the calls for independence have dominated the debate online. While #BetterTogether and #NoThanks, the hashtags used by those who want Scotland to stay part of the U.K, have 131,345 and 100,666 mentions, respectively, #YesScotland has 83,242—and #VoteYes has a staggering 670,784 mentions.

All in all, the Unionist hashtags have racked up 232,011 uses in the last month, and are dwarfed by the 654,026 uses of pro-independent Scotland hashtags.

So is this three-quarters of a million mentions a sign of a secret groundswell of support for the Yes camp, a not-so-silent majority about to make their voices heard? Not necessarily. A small minority section of the Yes campaign has become characterised by highly negative and aggressive campaigning; some No voters are feeling intimidated about speaking up in favor of the Union as a result.

However, the most high-profile weighing-in on Twitter comes from the Big O himself, President Barack Obama, who has expressed his hope that the United Kingdom remains “strong, robust and united.”

A separate tally on a Reddit thread discussing independence, meanwhile, suggests that the Union remains the favorable option—a sum of votes for Yes-voters comes out at 8,158, while the No camp edges it with a cumulative 8,896 votes.

Further polling—of a rather more reputable calibre—reported in the New Statesman gives it to the No camp with the thinnest of margins, 52 percent to 48. Of interest, however, is the data breakdown; men are significantly more likely to vote for independence than women, and the over-60s comprise a ballpark of support for the United Kingdom.