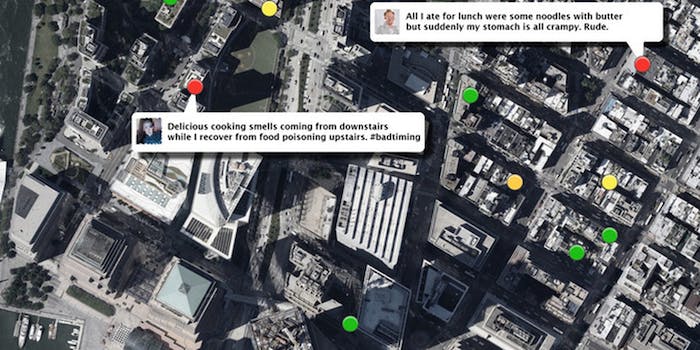 The nEmisis system geolocates tweets and analyzes them to track food poisoning.

If taking time in the middle of a bout of food poisoning to update your Twitter followers “OMG so sick ughh” isn’t peak oversharing, I don’t know what it is. But this growing proclivity for expressing our every feeling at every minute has some useful applications too—for one, helping improve public health.

The latest development in the evolution of social media as an epidemiological tool is the nEmesis, a machine learning system that tracks where people tweet about food poisoning.

Here’s the gist. The tool “listens to” millions of tweets and watches for keywords that could indicate that someone’s Chinese food dinner didn’t go over well—”threw up,” “so sick omg,” “ughhh cramps,” and that kind of thing.

It then geo-locates the tweets (the ones that publish GPS data, at least) and compares that to Google Map locations of nearby restaurants that the person could have been visiting. To account for the fact that someone could tweet from a restaurant at 8pm and at again at midnight from the bathroom floor, the tool opens up a separate data collection process that listens for new tweets from each person after they dine.

After a four-month-long test in New York City, the system collected 3.8 million tweets from more than 94,000 users, traced 23,000 restaurant visitors, and found 480 reports of likely food poisoning, according to the research paper, which will be presented at the Conference on Human Computation & Crowdsourcing in November.

The next part is the most interesting. Based on that data the tool assigned health grades to the restaurants and found they were a fairly close match to the grades from the Department of Health. That means a mass of ill people with smartphones could give just as accurate a report on food safety as official government inspections—and even better, because it’s in real time. That’s pretty significant.

Photo via University of Rochester