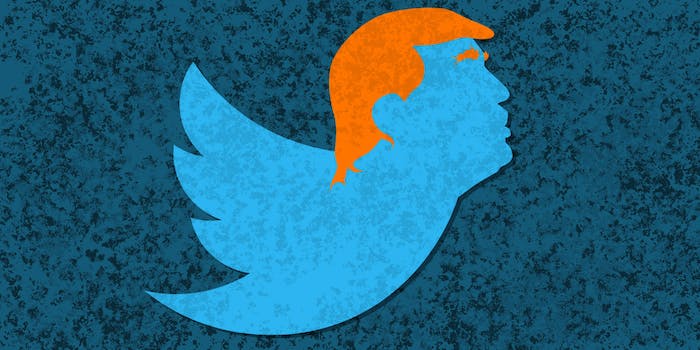 Arguments in favor of cutting off the president-elect are short-sighted.

When Twitter first entered the world in 2006, its founders probably hadn’t imagined the role it would one day play on the global stage. It’s unlikely that they could’ve foreseen that their platform would play host to diplomatic rows both serious and not-so-serious; that foreign leaders and B-list celebrities alike would vie for the mark of verification; and that the rise of the extreme right would be enabled by the platform’s supposed dedication to neutrality.

No world leader has relied on Twitter as their megaphone quite the way Donald Trump has. The now-president-elect, who joined in 2009, has racked up a whopping thirty-four thousand tweets and 17 million followers, many of whom started paying attention to him during his 2012 offense on President Barack Obama.

Of late, the president-elect’s tweets have provoked a range of reactions, from the angry to the comedic. His 140-character missives have put U.S.-China relations on shaky ground, caused Lockheed Martin’s stock to drop, and could be a threat to national security. For reporters and ordinary citizens alike, his Twitter feed is a maddening stew of hateful speech and wild provocations unsuited to his new job.

But for many, it’s Trump’s attacks on individual, private citizens, that cross the line. In the past few weeks, a number of media outlets have published arguments in favor of Twitter banning Trump, most of which focus on his singling out of individuals for perceived wrongs and the harassment doing so often triggers from his followers.

For example, when Trump recently accused Chuck Jones—the President of United Steelworkers 1999—of doing a “terrible job representing workers,” Jones was inundated with threatening phone calls from strangers who clearly felt emboldened by the president-elect’s words. Worse yet, a teenager received death and rape threats last year after Trump accused the young woman—who had asked a question at one of his rallies—of working for rival former Florida Gov. Jeb Bush (she didn’t).

As Sonny Bunch pointed out in the Washington Post, Twitter is well within its rights to remove anyone from its service and has defended controversial takedowns—like the account of Breitbart writer Milo Yiannopoulos—in the past. Unlike Facebook, which censors a wide array of content, Twitter has been reluctant to place restrictions on users but recently announced “progress” on addressing online abuse. Just a day later, several self-identified members of the white nationalist “alt-right” were banned from the platform.

Most of the calls to ban the president-elect from Twitter focus on what happens after Trump tweets an insult about a private citizen; or in other words, the behavior of his followers. This is tricky territory: While Twitter Rules prohibit “inciting others to harass another account,” that’s not exactly what Trump is doing… at least not explicitly. And banning Trump from Twitter for merely insulting another individual would be problematic—not least because it would mean the company would also have to consider banning users who insult Trump and his allies.

The alternative, of course, is Twitter could decide that Trump is an exceptional case and ban him anyway, despite his apparent skirting of the platform’s prohibitions. Doing so wouldn’t be so entirely out of character for the company, which I’ve argued already treats celebrities differently from other users.

Nevertheless, there are other arguments against banning the president-elect from one of the world’s most popular social media platforms. There are already plenty of reasons to be concerned about putting so much power in the hands of corporations at such a fragile time in the history of democracy. Silicon Valley companies engage in censorship, both for the sake of pleasing shareholders and users and at the behest of foreign governments. They’ve come under fire for enabling government surveillance, the very idea of which has resulted in self-censorship by some users. By arguing that it’s okay for Twitter to censor the president-elect of the United States for insulting other individuals, we’re placing our trust in a corporate institution to solve a problem of society and government.

Banning an elected official for whom nearly half the country voted will also undoubtedly inflame existing tensions and empower the conspiracy theorists who already believe that Silicon Valley companies are beholden to liberal bias.

Ultimately, the best argument against banning Trump from Twitter is that, without it, our insight into his actions and mindset would be minimal or nonexistent. He’s waited an unprecedented amount of time to hold a press conference, most recently tweeting on Dec. 12 that he would hold one “soon.” His Twitter feed, noxious as it may be, is the best source of information on his plans as president that we have. To ban it would be to cut off the American public from their soon-to-be leader.

The calls to ban Trump from Twitter are vindictive, short-sighted. They’re written by liberals looking for an easy and gratifying fix to a massive political problem. And while no one should suffer harassment online, there’s nothing to suggest that banning someone with the kind of power Trump has from a single platform will stop him from being able to incite it.

Instead of looking for yet another Silicon Valley quick-fix to politics, we should be looking deeper into our society to understand how we got here in the first place.

Jillian C. York is a writer and activist whose work lies at the intersection of technology and policy. She is particularly interested in freedom of expression, the ethics of algorithms, and the future of media. You can find her on Twitter at @jilliancyork.

Jillian C. York is a writer and activist whose work lies at the intersection of technology and policy. She is particularly interested in freedom of expression, the ethics of algorithms, and the future of media. You can find her on Twitter at @jilliancyork.