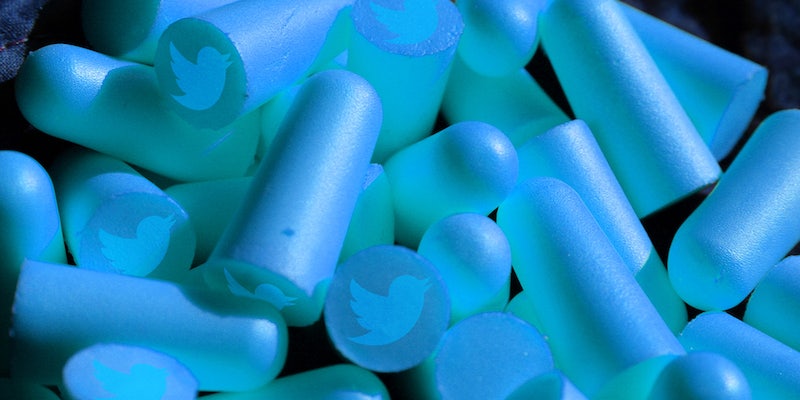 Why Twitter’s mute button is a troll’s worst nightmare

Muting is a more effective option than unfollowing.

“Don’t feed the trolls” is frustrating advice for people who get harassed online. Getting attacked with abusive comments and not calling people out on it can make even the thickest-skinned user feel like a doormat.

And sometimes it’s not the best advice—sometimes, it’s worthwhile, even necessary, to engage. Most sites have some sort of function to deal with this type of harassment, but up until today if you were being trolled on Twitter, your options were few.

Twitter’s newly-launched mute feature, however, offers a more effective remedy for a case of the relentless trolls (who, we’ve learned time and time again, love Twitter). Muting someone you follow on Twitter means you won’t see what they tweet or re-tweet, but it still appears you follow them. It seems a little passive-aggressive, and it is. In some cases, it’s also the new best defense against unwanted attention on the network.

The mute feature is a half-measure, but it’s one that people with online aggressors can use to their advantage. Blocking a troll on Twitter gives them a way to measure whether their campaign of abuse has had an impact. While it stops them from continuing unabated abuse, it offers an acknowledgement that their attack has hit its mark. It’s a silent success; you haven’t ignored them, so they’ve won.

The mute feature offers many of the benefits that blocking does, but it doesn’t give trolls the satisfaction that they’ve effectively gotten inside your head. People who mute trolls have a respite from the barrages of comments and jabs, but to the troll, it appears they’re simply ignoring these hateful messages. The troll’s power is curtailed: Users who push the mute button no longer have to see rude replies or hate-favs. They no longer have to receive push notifications alerting them that, yes, that jerk is calling them an idiot feminazi. Again.

For Twitter users who have Tweetdeck and Tweetbot, the mute option is nothing new. Those third-party Twitter services already give users the opportunity to silence haters by blocking their tweets without officially blocking their accounts. Tweetdeck’s option is more sophisticated, since it allows users to mute keywords as well as users. But for Twitter users who are regularly plagued online, the introduction of a native option is a smart way for Twitter to demonstrate that it is aware some of its users can act aggressively and inappropriately, and in turn offer another option to counter online bullies.

Twitter is, once again, following in Facebook’s footsteps here, since Facebook already allows users to unfollow people whose posts don’t appeal to them without going through with a full de-friend. While this isn’t an original innovation, in this case, offering a similar solution means Twitter takes its troll problem seriously.

But the mute feature has benefits beyond troll-blocking. There are politics involved with Twitter follows. We follow work colleagues, or family members—or prickly old friends who continually posts banal updates about their guinea pig who would get offended if they realized they’d been blocked—and we often would rather not deal with the fallout that follows… well, unfollowing. But this nicety means user experience is compromised. The mute button allows us to balance obligatory follows while allowing more quality control over what we actually see in our feeds.

Of course, there is a major downside to all this: Muting someone means you won’t know what flavor of shade they’re throwing at you, and if they’re having a conversation about you with other people, you won’t know about it.

The chorus is divided over the mute button. Over at Slate, Lily Hay Newman went so far as to say it neuters the service because it stymies the accidental discoveries one can make browsing their feed. That’s a strange argument: Our Twitter feeds are already self-curated and tailored to what we care about; removing an abusive account’s tweets isn’t going to prevent the service from working, unless it’s that rare bird of a Twitter account that both hurls abuse and posts unique content appealing to the target of abuse. The discover tab attempts to offer a way to surface content posted by other accounts, but each users’ primary Twitter feed is already pruned according to their tastes, politics, professional and personal networks, and a number of other factors. Offering a mute button doesn’t neuter Twitter—it just neuters trolls.