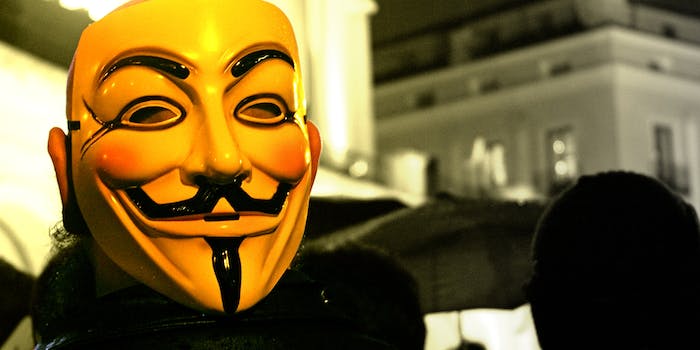 Twitter is working to eliminate any ISIS support on its network

Anonymous’s online battle with the Islamic State is starting to look like much ado about nothing.

The hacktivist group, which functions primarily online and has thousands of supporters around the world, declared “war” on Monday in a customary video. They promised “the biggest operation ever” against the organization that claimed responsibility for the deaths of 130 in France.

A review team at Twitter has been working nonstop to eliminate the present of Islamic State supporters on its network.

A major front in this online war is Twitter, where Islamic State supporters are allegedly spreading like wildfire. The social network has banned thousands of these pro-ISIS trespassers, the New York Times reports, citing a terms-of-service violation which prohibits supporting terrorism.

To the applause of its own supporters, Anonymous claimed on Friday to have whacked more than 20,000 ISIS accounts—amounting to nearly half of the known active accounts, according to estimates from earlier this year. The process generally works by curating a massive list of Twitter accounts in a text document, designating them as “ISIS-affiliated,” and publishing them online. The group then reports the accounts, some using a widely circulated “Twatter Reporter” bot.

If anyone’s engaged in an online war, however, it’s the people at Twitter, who are working—perpetually—to scrub extremist views and violent threats off the face of the Internet.

A spokesperson for Twitter, who asked not to be quoted by name, told the Daily Dot that the lists generated by Anonymous are not being used by the company, saying research has found them to be “wildly inaccurate.”

“Users flag content for us through our standard reporting channels, we review their reports manually, and take action if the content violates our rules,” the spokesperson said, adding: “We don’t review anonymous lists posted online, but third party reviews have found them to be wildly inaccurate and full of academics and journalists.”

Whether flooding the company’s review team by reporting users off a massive, likely unreliable list of names is counterproductive to banning ISIS, Twitter refused to comment.

A review team at Twitter has been working to eliminate any ISIS support on its network, the spokesperson said. The accounts get reported from all around the world, one of several reasons language skills are so highly valued at the company. (Twitter staffs employees fluent in Arabic to personally review those accounts before suspending their service, the spokesperson said.) Many of the alleged ISIS accounts communicate in Arabic, but the messages are often split into multiple tweets due to Twitter’s 140-character limit.

Photo via gaelx/Flickr (CC by 2.0) | Remix by Max Fleishman