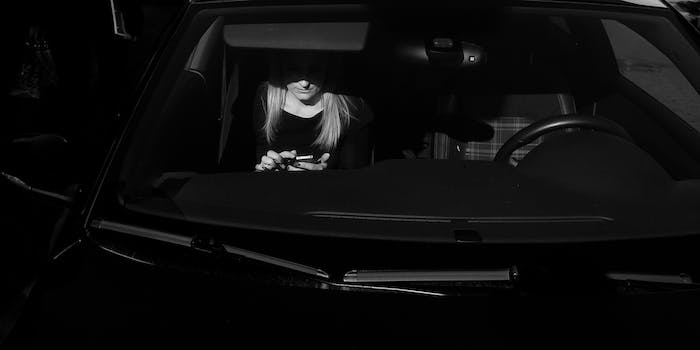 Twitter survey asks what we want in safety features

The 5-minute survey asks all the right questions.

Shortly after I woke up this morning, I checked my Twitter feed. And there, taking up almost a third of the screen, sat a request asking me to take a survey about how Twitter deals with harassment.

The social network has a troubled history when dealing with online harassment. For years, the complicated reporting system didn’t get much of an upgrade, and frustrated users with an endless loop of help pages and responses that often did nothing about the problem of abuse. 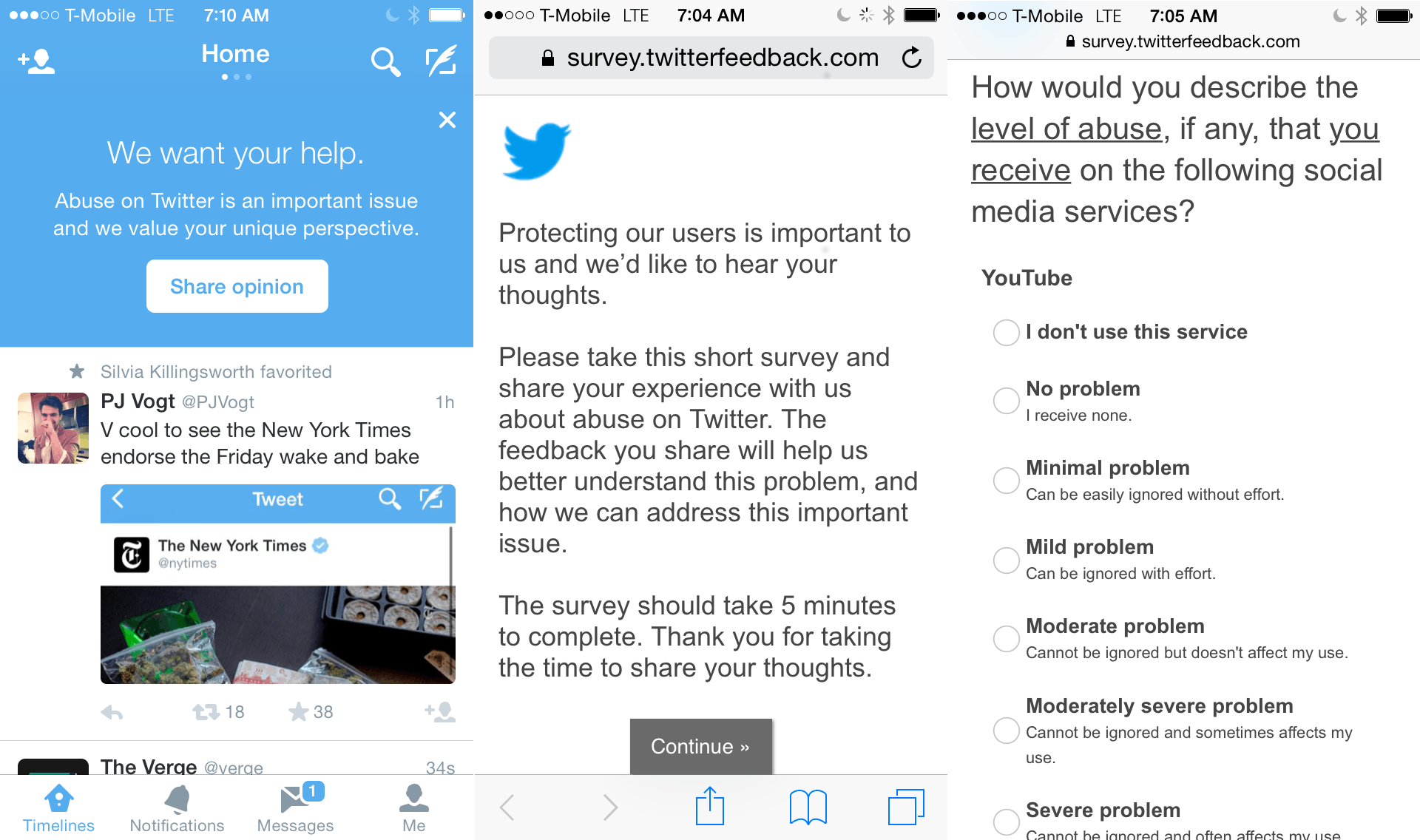 Now though, Twitter appears to be taking abuse even more seriously. In December it rolled out new changes to the harassment reporting system, and on Thursday, debuted new plans to extend the revamped reporting system and additional safety measures more broadly across the network.

The harassment survey is just one more way Twitter is dealing with it—by asking people to explicitly lay out the problems they have with the service.

The survey doesn’t appear to be in conjunction with the updated harassment features debuted yesterday. Users have reported seeing the surveys for at least the past week or so.

Whoa! Never thought I'd see this from Twitter: A survey about abuse and harassment online pic.twitter.com/WnUoxfO34v

Before I took the survey, the company informed me it would take about five minutes, significantly longer than other surveys Twitter regularly runs for advertising purposes. The questions were fairly comprehensive, asking me to describe the type of harassment I’ve received, if any, and how it compares to other social networks like Instagram or Facebook. Twitter also asked what my own harassment reporting experience is like.

Some questions were multiple choice, but others simply provided a blank space for me to write as much, or as little, as I wanted.

It’s unclear who receives this information and what Twitter plans on doing with it. Some of the questions were specifically phrased to me as a verified user, so the survey might vary from person to person. And at the end, it asked if I would be comfortable with speaking with Twitter about abuse I’ve received, so it’s not an anonymous survey. I’ve reached out to Twitter for more information and will update the story if I hear back. 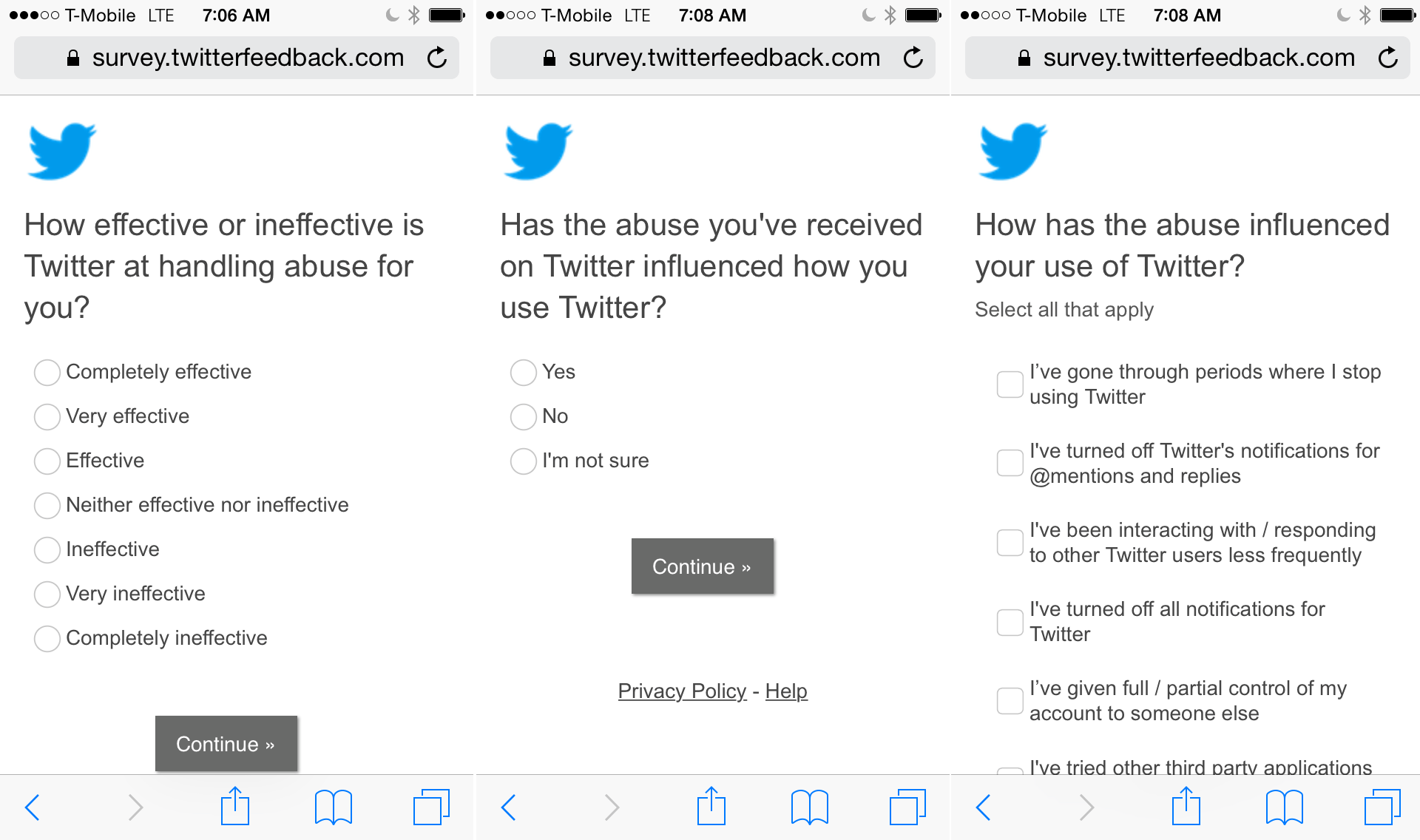 Between overhauls of abuse reporting and the user feedback surveys, Twitter is clearly doubling down on their efforts to make the service safer. And considering CEO Dick Costolo has admitted the company “sucks” at dealing with bad behavior on Twitter, it was only a matter of time before we started seeing significant improvements. Here’s hoping the surveys help.