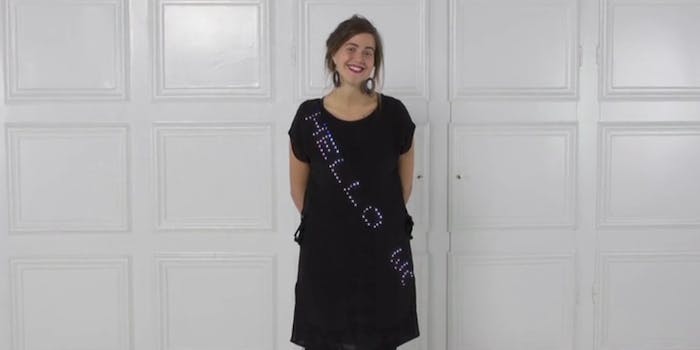 Young Swedes had their tweets displayed on a dress at a major political summit using the hashtag #Twitterklänning.

Every year, the great and powerful of Sweden converge on the island of Gotland for a summit.

But there is a key voice typically missing from Almedalen Week, according to Crossing Boarders, an organization aiming to help create “an equal and inclusive society”: That of Sweden’s youth. To help those at the younger end of the country’s populace be heard, Crossing Boarders, a mobile provider, and creative agency Deportivo decided to play gatecrasher.

The trio took the message of the country’s youth to its leaders through an Internet-connected dress that displayed tweets from those yearning to be heard.

Before Almedalen Week, Crossing Boarders recruited 30 “ambassadors” to raise concerns through the dress. Other young Swedes were also asked to tweet using the hashtag #Twitterklänning (“Twitter dress”). In total, 454 tweets bore the tag and the dress was mentioned thousands of times.

Some of the “opinions, dreams, and thoughts” were displayed on the dress “in front of the eyes of the ones calling the shots in Sweden,” Deportivo’s Stefan Ronge told the Daily Dot.

Among the issues highlighted through the dress were “gender equality, lack of lower rent apartments for youth, lowering of legal age for voting,” racism and the education system, Ronge said.

Crossing Boarders, also behind a tool to measure gender equality on Twitter, took the dress “to seminars and highlighted the issues and opinions that came in and met a number of people in power.” Those people included five Swedish ministers, while another was interviewed by youngsters who were tweeting at the dress and a poll suggested 46 of Almedalen visitors were aware of it.

The dress does seem to have had a tangible impact. “The Twitter Dress got a pledge from the minister of equality, Maria Arnholm, on addressing the issue of mandatory education on gender equality for Swedish teachers,” Ronge said.

It’s not the first fashion item to display tweets. Nicole Scherzinger wore a dress last year that showed messages from fans. However, the ex-Pussycat Doll won’t have made nearly the same type of impact the Twitterklänning did.