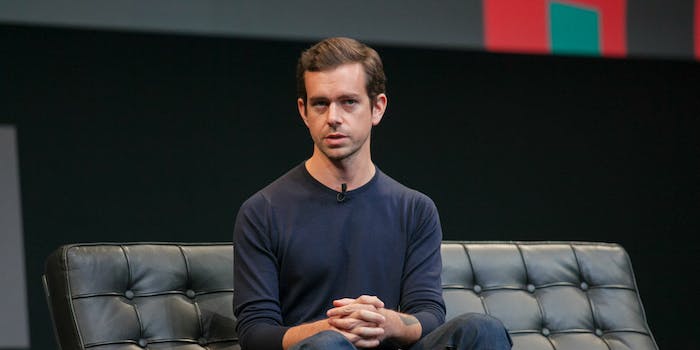 Accusations of a liberal bias still fly in the face of the company's actions.

Conservatives can’t catch a break on Twitter, according to … well, themselves, and not much else. Twitter CEO Jack Dorsey (and his facial hair) gave an interview to Recode via Jay Rosen, and it was, for lack of a better term, a grab-bag of topics anchored by Twitter’s lengthy history of failings. It’s worth reading, if only because it comes across as slightly less bogged down in tech-bro babble and Congressional leaders asking why their grandkids don’t call.

I think it’s more and more important to at least clarify what our own bias leans towards, and just express it. I’d rather know what someone biases to rather than try to interpret through their actions. So, if we can say that, and also have the freedom to evolve and change, then at least people know it, and I think it allows us to remove that a little bit more from the work, but it has to be proven out in our actions as well, so … I mean, we have a lot of conservative-leaning folks in the company as well, and to be honest, they don’t feel safe to express their opinions at the company.

They do feel silenced by just the general swirl of what they perceive to be the broader percentage of leanings within the company, and I don’t think that’s fair or right. We should make sure that everyone feels safe to express themselves within the company, no matter where they come from and what their background is. I mean, my dad was a Republican. When I was growing up, was on the radio all the time with Rush Limbaugh and Sean Hannity, so my mom was on the opposite end of the spectrum and ….

Dorsey has been on somewhat of an odyssey in recent weeks, making public appearances and enacting some level of outreach, ostensibly to find a method to fix Twitter’s increasing toxicity issues. Dorsey went so far as to appear before Congress after Republicans and President Trump promoted a theory that Twitter and other media companies have been censoring positive speech about them.

Rosen pushed Dorsey on the subject of his conservative employees’ feelings of intimidation, asserting that free speech inevitably comes with a risk of the public’s opinion changing in the wake of individual comments.

“The most basic risk is that someone will criticize you,” Rosen said. “Do you ever feel like saying to your conservative employees, ‘Look. Speak up. You might get criticized, but you have to have the courage to do that. We’re not gonna penalize you, but you are, to some degree, when you speak up in public or in a public culture of a company, you are, yes, vulnerable to criticism, vulnerable to reaction. That’s part of public life. That’s part of being a mature citizen?’ Do you ever say that back to them?”

Dorsey agreed with the sentiment, although he qualified that by saying it’s easier said than done.

“I was a kid that was very shy,” Dorsey said. “I grew up with a speech impediment. It taught me not to speak at all, and I eventually got over that, and speaking up in a collection of 3,000 people where you make an assumption that they potentially think differently than you or believe differently is hard. It does require sacrificing a lot of your ego and your intellect in being vulnerable for a minute.”

Dorsey said that he doesn’t know if engaging in political debate is always the right first step in enabling people to feel safe to express themselves but that he encourages people speaking up.

A lot of what Dorsey said in his interview with Recode seems to fly in the face of Twitter’s history of protecting far-right voices, some of whom regularly broke Twitter’s own code of conduct by calling for extreme action against opposing political groups. The Wall Street Journal reported earlier this month that Dorsey personally intervened in a company deliberation about InfoWars host and conspiracy theorist Alex Jones. Instead of a ban, Jones received a one-week suspension, thanks to an overruling from Dorsey, according to the Wall Street Journal. It was a controversial decision, considering almost every other major media company, including YouTube and Facebook, had effectively banned Jones from their platform.

The toxicity on Twitter has reached such a boiling point that users began a “Ban the Nazi’s, Jack” campaign, aimed at removing the explicitly white supremacist and alt-right accounts that move freely on the platform.

Another issue of contention Dorsey discussed with Rosen was the misleading assertion that Twitter has been shadowbanning conservative voices, leaving them untouched but otherwise keeping their voices from showing up in users’ feeds. It was quickly determined that users accusing Twitter of shadowbanning were merely victims of the company’s algorithms, which determine which tweets are faring more popular and impactful than others. Perhaps alt-right Twitter should just learn to be more entertaining and informative.

Perhaps they could do with the timeless XKCD webcomic, appropriately titled “Free Speech.“