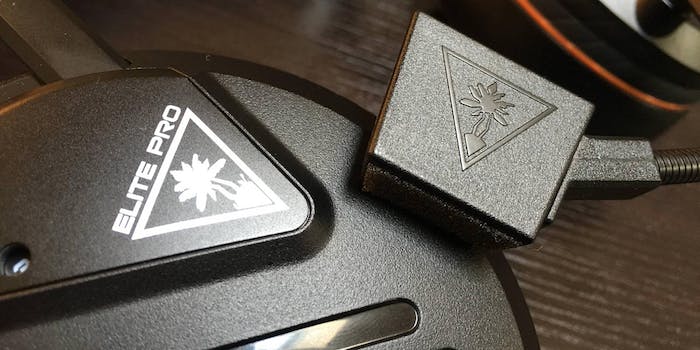 Turtle Beach may have regained its place atop the gaming audio industry.

In the years since Turtle Beach became a household name, the company has seen intense competition from the likes of SteelSeries, Tritton, and many other high-end headset manufacturers. Now, Turtle Beach is aiming to retake its throne with a new line of ultra-high-end audio gear that is the epitome of premium.

During the Xbox 360 and PlayStation 3 era, the Turtle Beach name was synonymous with hardcore gaming. If you had a Turtle Beach headset, you were immediately at a huge advantage in most fast-paced online shooters: You could hear an enemy’s footsteps with such clarity that picking off foes before they knew what hit them was a relatively simple task. 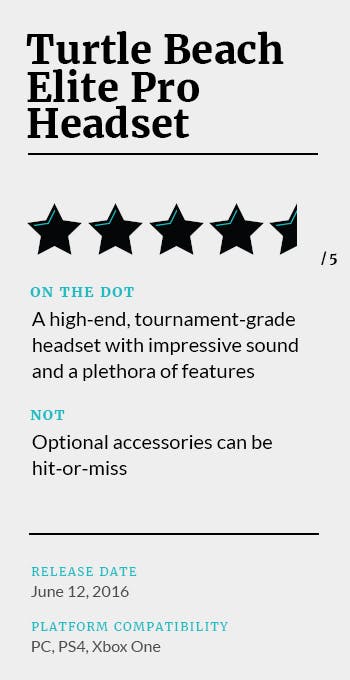 Over time, Turtle Beach continued to roll out new-and-improved versions of its headsets for various platforms, and eventually the company’s product lineup became somewhat cluttered. It was hard to determine what headset was the best of the best, and when competing brands began to muscle into the space, gamers who were once dedicated Turtle Beach fanatics eventually began to branch out.

The Turtle Beach Elite Pro headset and its ultra-premium accessories are clearly the absolute top of the company’s product line, with the highest-quality components, and there is no longer any doubt what “the best” Turtle Beach headset is. This is it.

Let’s get the specs out of the way up front: The Elite Pro uses 3.5mm stereo audio jacks for all of its connections, and it will work with both the Xbox One and PlayStation 4 when plugged into their respective controllers. Each ear cup house a 50mm “NanoClear” speaker, and the headset weighs just over a pound. The ear pads are a mix of leather and memory foam, and there’s an adjustable “ProSpecs” feature that creates small indentations in the pads if you game while wearing glasses, so there’s no added pressure on the sides of your face. The build quality is nothing short of what you’d expect from a headset that costs $200; the plastic that encases each ear cup is thick and rigid, and the two-tier headband is extremely sturdy. The foam padding on the inside of the headband is firm but still comfortable, and you can adjust both the tension of the headband and the drop of the ear cups, so if you have a big dome or game while wearing a hat—like I often do—the pads will still feel secure when the size is maxed out.

The headphone cable has a breakaway point just a few inches down the wire, which is a godsend if you hate having to wrap your wired headsets in a lengthy cable, and the removable microphone easily snaps in and out without a fuss. There’s even a tiny plastic arm that holds the microphone’s foam windscreen in place, and as someone who has lost more of those little foam covers than I care to admit, this small addition makes me particularly giddy. 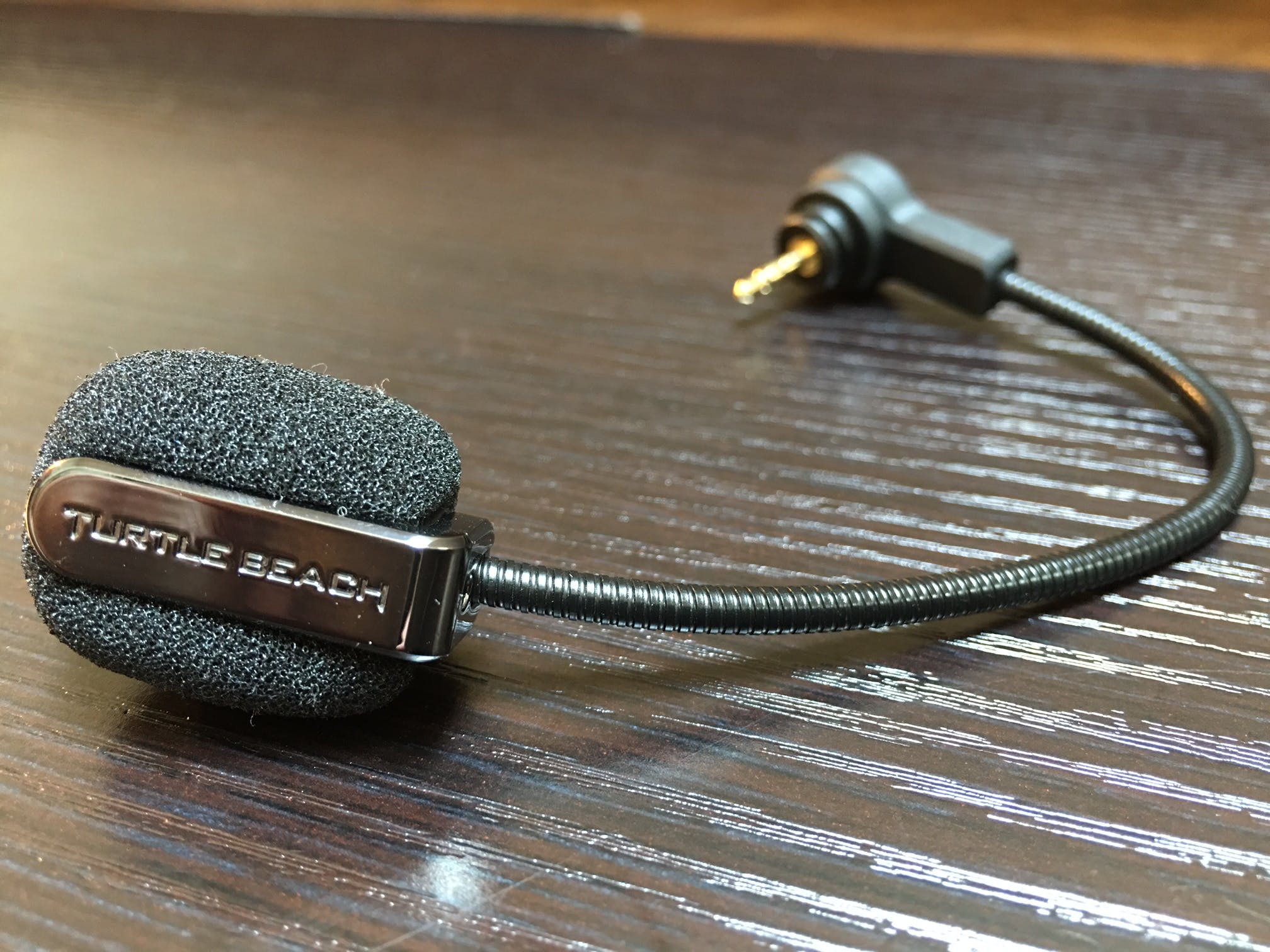 Of course, since this is a gaming headset, the sound quality matters more than anything I’ve mentioned thus far, so let’s get into it.

Turtle Beach uses a lot of fancy—and trademarked—terms for its audio technology such as NanoClear and TruSpeak. After reading all of the documentation and blog posts, I still have no idea what those terms actually mean, but what I can tell you is that games sound absolutely fantastic with this headset.

I put the Elite Pro through a few different tests, including many, many rounds of Overwatch, hours upon hours of DayZ, and even a few days where I just listened to my Spotify playlist while working. In Overwatch, listening for another player’s ultimate attack sound cue was easier than ever, and I’ll go ahead and give credit for at least a dozen ambushes in DayZ to Turtle Beach as well.

This isn’t to say that you don’t have to make sure your own computer’s (or console’s) audio settings are correctly tuned—there’s no headset on the planet that will make bad settings sound good—but the Elite Pro manages to nail both the crisp highs of grassy footsteps and the deep thump of a grenade explosion better than pretty much any headset I’ve ever tested, and I’ve been doing headset reviews for the better part of a decade. It’s very, very good.

In fact, there’s literally only one thing that could possibly make the headset, by itself, sound better, and Turtle Beach actually built that, too. 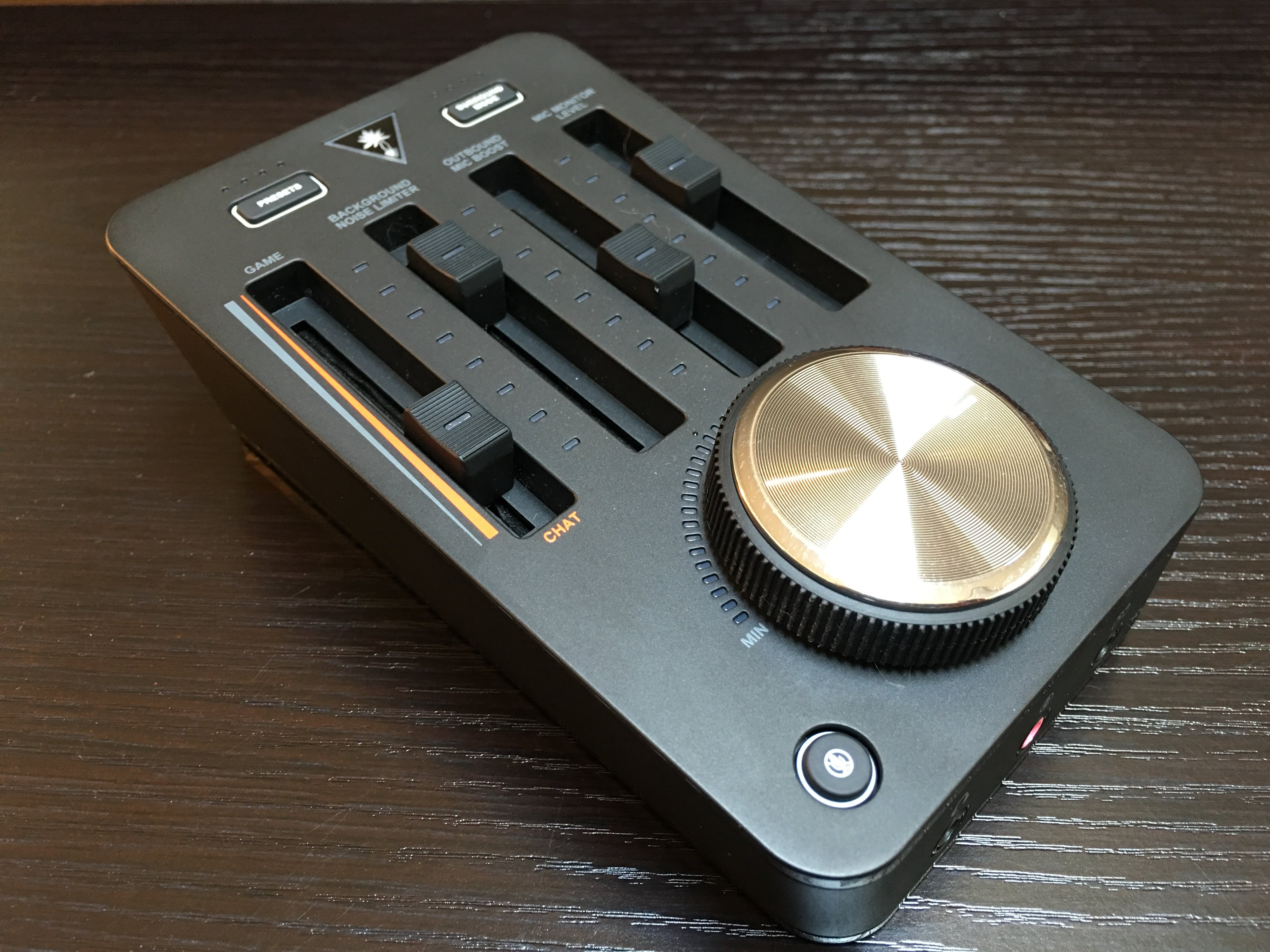 The Elite Pro TAC (short for Tactical Audio Controller) is an optional accessory for the Elite Pro headset, but once I tried the two in tandem, I found it extremely difficult to go back. The TAC sits separate from the headset, on a desk or coffee table, and acts like an extra audio brain.

The TAC features individual sliders for mic boost, background noise cancellation, outbound mic monitoring, and a mixer slider for gaming and chat audio. The large dial acts as the master volume control, and a pair of buttons on the top let you cycle through a total of 16 different audio modes. 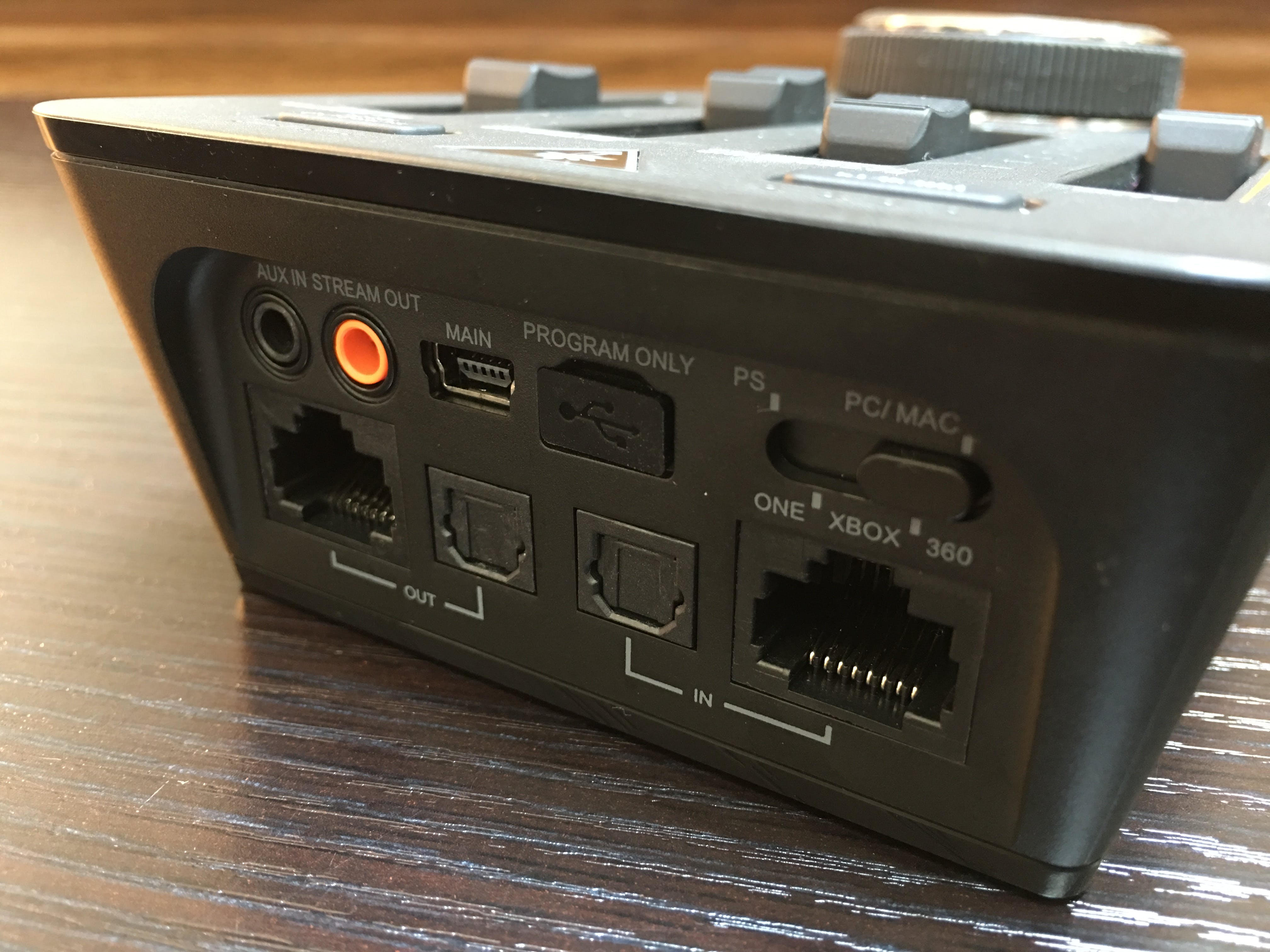 It connects to the headset via 3.5mm jacks, but its system connection options are much more robust, allowing you to use inputs and outputs for optical audio connections, as well as a USB output to connect to a PC or Mac using something other than a standard audio jack. The TAC can also be chained with others for in-game communication in tournament settings, showing Turtle Beach’s dedication to making the Elite Pro the go-to esports headset for both professional gamers and amateurs with big dreams.

What’s particularly great for the PC gaming crowd is the TAC’s ability to pull double duty as both an audio controller and an external USB sound card with full 7.1 surround sound capability. That’s a massive bonus, considering such cards usually cost a significant amount on their own.

The different audio presets are really the star of the show with the TAC. There are settings for various types of music, several movie genres, and of course a plethora of options for gaming. There’s even a mode dedicated specifically to pinpointing footsteps which is so good that it almost feels like cheating. Almost. Along with the headset and TAC, I was able to try out another tournament-minded accessory for the Elite Pro: the Elite Pro Tournament Noise-Cancelling Microphone. It’s a mouthful in name, and also a mouthful in size, with a massive mouthpiece and extra thick adjustable boom.

Unlike the TAC—which takes the entire Elite Pro experience from great to superb—this microphone doesn’t add a ton to the overall package. It’s big and sturdy, which is great, but in terms of audio quality, it was difficult for me or my online teammates to choose between it and another mic.

The consensus seemed to be that there was very little difference between the default Elite Pro headset and this tournament-grade option. Both sound good, but unless you’re playing in an area with a ton of noise, this fancy mic’s marquee feature will go largely underutilized. In short, it’s a great add-on if you’re going to be playing in a crowded stadium—hence its Tournament branding—but most dedicated gamers will do just fine with the fantastic mic that’s already in the box.