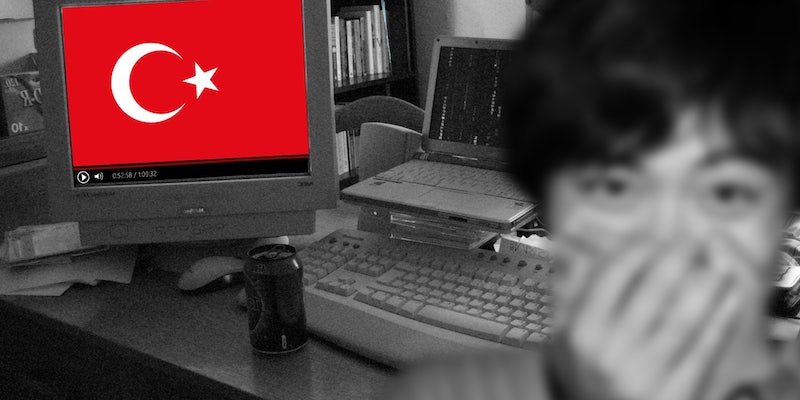 Watch the video that caused Turkey to block YouTube

The Turkish government has banned that country’s access to YouTube, apparently in response to a leaked, top-level recording discussing possible military action in Syria.

First, a few notes of clarification about what we can and cannot confirm. Such a video exists: the Hurriyet Daily News reported Thursday that “an illegal recording of a key high-level security meeting on Syria was released through social media” that day. It believes the voices in the recording include Foreign Minister Ahmet Davuto?lu and head of National Intelligence Organization (MIT) Hakan Fidan.

Turkey’s Foreign Ministry claims the audio has been doctored. Hurriyet reported later on Thursday that the ministry released a statement referring to “the recording and leaking of such a top secret meeting in the foreign minister’s office,” calling it “an act of espionage, and a very serious crime.” Several sources in Turkey have reported that the government has instituted a ban on broadcasting about the tape.

Multiple Turkish sources on Twitter pointed us to the below video, which seems to fit all the above descriptions. It’s decidedly unsexy. In fact, calling it a “video” is a stretch: the only images are of stock photos and transcripts.

But the words themselves, while somewhat confusing, are clearly talking about the possibility of military engagement with Syria. An English-language transcript of the first video, which multiple native Turkish speakers have vouched for as accurate to the Daily Dot, shows the speakers openly discussing how Syria would respond if there were an attack on the Suleiman Shah Tomb, the grandfather of Osman I Gazi, founder of the Ottoman Empire and a source of Turkish national pride.

Suleiman Shah’s tomb is technically Turkish land, but it’s surrounded on all sides by Syrian borders. It has Turkish soldiers stationed there, and Turkey has repeatedly said it would treat an attack on the tomb as an attack on Turkey.

The videos, broken up into two parts, are below. The transcription, which is unattributed, is for the first video only. Note that there’s no audio for the first four lines of the transcript; the audio only corresponds with the words beginning with “FIRST SCREEN.” It’s not clear if the transcriber intended those opening lines to be an accurate representation of what was said before the tape started rolling, or simply speculation.