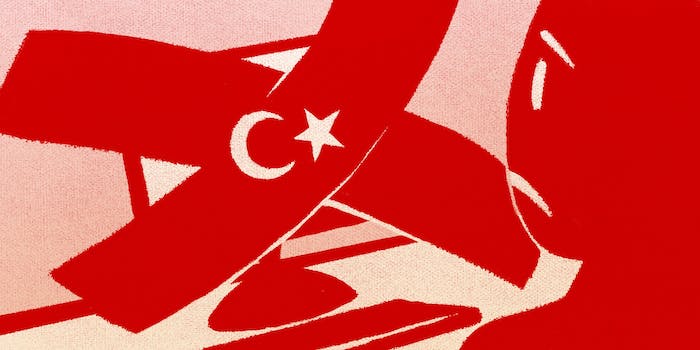 It's not a good look for the Muslim-majority country.

Turkey has been quietly censoring atheist and anti-Muslim websites as defamatory online, according to a recently unveiled court order.

The order, issued in late February by a court in the Turkish capital of Ankara, banned 49 URLs. The majority, if not all, are centered around atheist or anti-Muslim themes, though many would be considered tame by Western standards. They include the website for the French satirical magazine Charlie Hebdo, its corresponding Wikipedia entry, and news articles about the controversial cover that caricatured the Muslim prophet Muhammad, which ran after an Al Qaeda-affiliated attack on its offices.

The order also bans numerous blogs, forum posts, and Twitter content that are either critical of the Quran or satirical about Muslims, as well as the website of the Turkish Association of Atheists. Contrary to previous reports that Facebook had banned just a single group that mocked Muhammad, this order includes at least nine Facebook pages, including this image of Muslims praying in multiple directions, rather than all facing the holy city of Mecca. It also includes one individual’s account that appears to have been deleted entirely.

This adds five websites to the 66,127 already banned in Turkey, nine to the 3,907 pages that have been blocked or removed on Facebook, and three to the 2,081 items of Twitter content that have been withheld in Turkey.

The news was revealed Monday by two law professors, Yaman Akdeniz and Kerem Alt?parmak. The pair are perhaps best known for successfully fighting against President Recep Tayyip Erdo?an’s earlier Twitter ban at the Supreme Court last year. The duo are among the candidates for the international Index Awards, which honors people who fight for free expression.

Courts in the Muslim-majority country have issued 149 gag orders in the last five years, all citing ongoing investigations, such as the corruption case against Erdo?an’s family and controversial news of Turkish trucks, laden with weapons, seen headed into Syria.

News reports previously revealed that Turkey had banned physical copies of the Muhammad issue of Charlie Hebdo, stopping several newspapers from printing that caricature. Only one newspaper, Cumhuriyet, was able to circumvent censors, sneaking the image inside the paper, rather than on the cover it showed to authorities. Despite that, the newspaper still received death threats, and police raided its distribution trucks the morning the Turkish issue was distributed.

Some news websites that did prominently display the Charlie Hebdo image, like The 24, have now been banned for a second time.

The ban on the Wikipedia entry, however, is only on the English language version. Censors let the Turkish version, which doesn’t feature any images, slide.

Previously, the Turkish pianist and composer Fazil Say was convicted for blasphemy for his remarks on Twitter, where he cited a 11th century Persian poem on Muslim hypocrisy.

The Association of Atheism website, the second target of the ban, promotes atheism without critiquing Islam or any other religion and is a legally registered organisation recognized by the European Union. As part of their yearly report on freedom of belief, the Association does list 14 court cases, including Fazil Say’s 10-month prison sentence, cartoonist Bahadir Baruter’s 1-year sentence, and Armenian linguist Sevan Ni?anyan’s 1-year prison sentence, where Turkish citizens have been accused of blasphemy.

Despite the shaky legal footing, Turkey’s use of defamation laws to censor atheism under Erdo?an’s leadership—he was the country’s prime minister immediately before becoming president—is not new. The first Turkish website on atheism, atheizm.org, as well as the website of famous New Atheist Richard Dawkins, were both banned in 2008, and a satirical blog on prophet Muhammad was censored in 2013.

In blocking the sites, the judge who issued the censorship order didn’t give a reason for the ban, simply stating an ongoing investigation and listing the 49 new URLs to be added to Turkey’s censorship index. Though blasphemy isn’t among Turkey’s list of Internet crimes, a government-sponsored bill to apply the whole Penal Code—which does—is making progress.