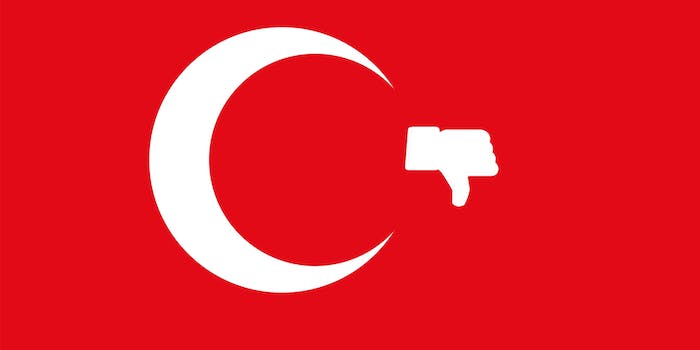 7th grader under investigation for mocking Turkey’s president on Facebook

How low can Turkey go?

Proving that Turkey has yet to plumb the depths of just how thin-skinned President Recep Tayyip Erdo?an can get, a 7th grader has now testified for mocking the leader on Facebook, according to the country’s Hurriyet Daily News.

The boy is identified only by his initials, U.R.E., which makes sense, given that he’s only 13 years old.

Also unknown is precisely what the boy said. It’s clear, though, that he’s from a household that isn’t fond the litigious prime minister-turned-president. As the boy’s father told the Hurriyet, “I have not seen what he wrote or shared. But our prosecutors and police should be more interested in dealing with those who push our country to the edge of division, and with those who rob the country.”

Erdo?an’s Turkey has cracked down hard on critical speech in recent years. The censorship has taken multiple forms, ranging from bans on YouTube and Twitter to block evidence of corruption of Erdo?an’s own administration to jailing a former Miss Turkey for an Instagram poem that poked fun at him—which is ironic, given that as a younger man, Erdo?an himself was jailed for subversive poetry.