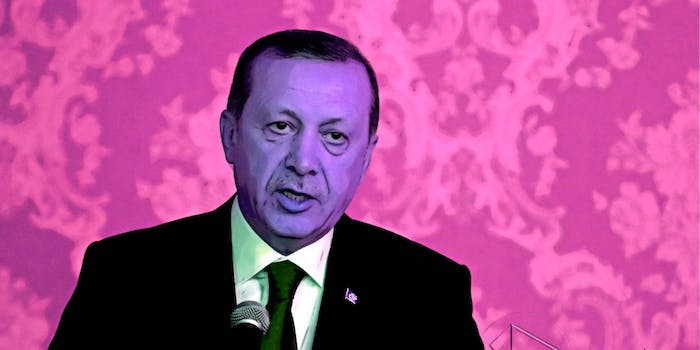 Merve Buyuksarac, an industrial designer who was crowned Miss Turkey in 2006, received a 14-month suspended sentence on Tuesday for offending President Recep Tayyip Erdo?an of Turkey.

Buyuksarac, 27, was charged with insulting a public official after quoting lines from a poem, known as “The Master’s Poem,” in an Instagram post, which she later deleted. A satirical adaptation of Turkey’s national anthem, the poem was first published by the Turkish satirical magazine Uykusuz.

Since Erdo?an assumed office less than two years ago, nearly 1,900 criminal cases have been filed against Turks accused of insulting the president, many of them journalists and academics. The crime carries a penalty of up to four years in prison, though imprisonment is rarely imposed.

Under the suspended sentence Buyuksarac received, she may be imprisoned for doing, or saying, anything deemed insulting to Erdo?an.

Erdo?an’s lawyer, Hatice Ozay, argued in court that Buyuksarac’s post amounted to an “attack” on his client’s “personal rights,” one that had gone beyond “the limits of criticism.”

Emre Telci, a lawyer for Buyuksarac, told the Associated Press that “insult trials” are being automatically filed against Turks. “Merve was prosecuted for sharing a posting that did not belong her,” he said. “My client has been convicted for words that do not belong to her.”

Erdo?an has been widely criticized for the prosecution of Buyuksarac—due to her célébrité, but also because of the case’s overt irony: While mayor of Istanbul, Erdo?an was himself imprisoned for reciting a poem deemed an incitement to religious hatred.

“Back then he demanded the freedom of speech that he now denies to his critics after taking power,” writes Jonathan Turley, who also recalls how, in 2014, a teenager was arrested at school after giving a speech depicting Erdo?an as the “chief of theft, bribery, and corruption.”

Late last year, in the most bizarre of cases, a Turkish court heard expert testimony concerning Lord of the Rings character “Gollum”—specifically, whether his nature is “good or evil”—after a physician juxtaposed Erdo?an with the creature in a Facebook meme. The physician, Dr. Bilgin Ciftci, reportedly lost his job with the Public Health Institution of Turkey for sharing the image.

Turkey is far from the only country to imprison its citizens for speaking ill of its leaders, however. Thailand, Spain, and Switzerland have similar laws, as do many others.

Four months ago, a 17-year-old in Poland faced prosecution for posting a satirical video on Facebook of President Andrzej Duda. The teen’s computer was confiscated, but after Duda criticized the prosecutor on Twitter, the case was dropped.

In February, U.S. presidential candidate Donald Trump, now the presumptive Republican nominee, said, if elected, he would “open up” libel laws, so that it would be easier for him to sue news organizations and “win lots of money.”