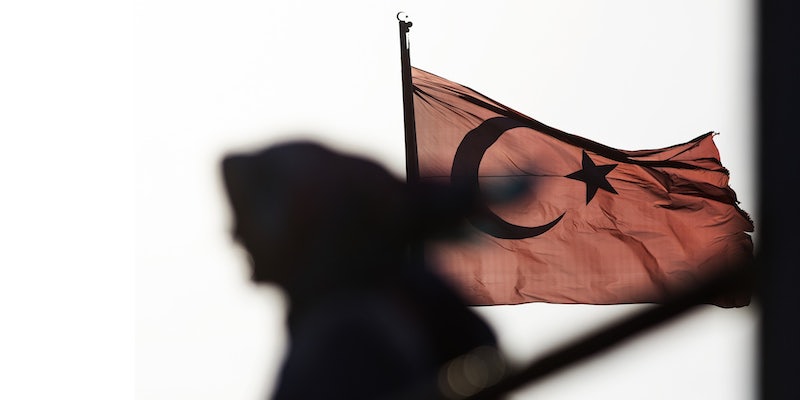 The reality of life under Turkey’s internet censorship machine

Turkey, the world champion in Twitter censorship, presents a tough challenge for regular internet users thanks to its growing blacklist of 100,000 banned websites.

But determined Turks are tough. After all, they are the ones who placed the #TurkeyBlockedTwitter hashtag on world’s top trends list—while Twitter was blocked nationwide.

And despite Turkey’s President Recep Tayyip Erdoğan having sued nearly 2,000 people for insulting him—many for social media posts—he couldn’t manage to stop online political criticism inside Turkey, nor could he stop networks of activists spreading news of Turkey’s human rights violations all around the world.

As such, the ‘hurdle web’ of Turkey (as named by the citizens’ collective behind the list of banned websites, Engelli Web) has turned many ordinary citizens into anonymous internet activists.

The risks of having an opinion

Let’s start with the risk assumptions. Anyone in Turkey may get fired or remain unemployed for not being sufficiently pro-government. Opposition claims that young graduates are asked to become a member of the party in power, the Justice and Development Party (known by its Turkish acronym, AKP), to secure a job; local AKP branches reportedly distribute job application forms. For those who obtain a position at a government body, social media serves as a background check, so many delete critical comments they publicized in the past.

Sometimes it is hard to keep up the pace with the government. Just this week, one pro-Erdoğan columnist lost her job for a tweet criticising Erdoğan’s changing Israel policy. Another media professional, who spoke with the Daily Dot under conditions of anonymity, said he does not post or retweet any political opinion whatsoever for fear of reprisal from different groups at his workplace.

Anyone who posts with their real name and profile picture runs a higher risk. Turkcell, a pro-government mobile operator that stood on the wrong side of a child abuse scandal, is now seeking 10,000 Turkish Liras (about $3,345) in damages from thousands of Twitter users who joined the calls to boycott the company. One of the defendants told the Daily Dot that he didn’t use his real name on Twitter, but Turkcell lawyers found him by reverse searching his Twitter profile photo on Facebook.

Public figures have nowhere to hide if they dare to criticise Erdoğan due to an online lynch mob of pro-AKP trolls that finds them. In April, Dutch publicist Ebru Umar, who was in Turkey for a holiday, not only became victim of an organized online harassment by thousands of Erdoğan fans but also got detained in the middle of the night after police received “a tip” that she insulted the president. From newspaper editors to top models, any public figure who makes fun of Erdoğan can face up to four years in jail for “defaming Turkish president.” Even abroad, Turkish Embassies are working hard to make sure that no one defames Erdoğan on the internet.

Human rights defenders, journalists, and opposition politicians pay the highest price. Criticising Turkey’s security policy towards Kurds or reporting about civilian deaths can bring “terrorism” charges. Most recently, four academics who signed a peace petition, and three journalists who joined in a solidarity campaign, were accused of “spreading terrorist propaganda” and were put in jail. İrfan Aktan, editor of İMC-TV, a channel known for its critical coverage of the military operations in Southeast Turkey, was detained in a house raid and interrogated by counter-terrorism police to explain why he was “retweeting other journalists’ articles.” Hayri Tunç, then a reporter for online news portal Jiyan, got arrested and then sentenced to two years in jail for “spreading terrorist propaganda” on social media. Jiyan is among the long list of news websites banned by the government since last summer.

The blank page of censorship

While Turkey’s censorship machine is not as technically capable as China’s Great Firewall, it is still very effective in controlling the spread of the news in rural Turkey, especially when combined with gag orders issued right after political crises. Yet, Turkish citizens continuously adopt new methods of circumventing online censorship to read news, and they create novel ways to share their opinion without risking their freedom or job security.

First of all, if a website does not load in Turkey, or if internet access is unusually slow, it is most likely not a technical fault or server maintenance but government censorship. Acknowledging that the government is the leading cause of access problems actually saves much time; you don’t need the restart your router or call the internet company, but just switch to your favorite virtual private network (VPN) service and keep on.

According to a recent survey, Turkey is among the top five countries in VPN use, and the most popular reasons for use are accessing restricted sites and reaching news. One popular VPN service, ZenMate, notes the spike in number of users from Turkey when Twitter and Facebook was blocked by the government following the recent explosions that hit Istanbul Airport. This habitual practice of VPN use plays a key role in the aftermath of such incidents thanks to a government that also developed a practice of media blackouts, time and again. Back in March 2014, the Tor anonymity network had a similar surge of new users from Turkey after Twitter, a hub for news of government corruption, was blocked before the local elections. When the Turkish government took a step further and blocked Tor’s website as well, the Daily Dot published a list of unblocked URLs and called for more Tor bridge relays—private Tor connections—for Turkish Tor users.

Not every company operating in Turkey is a defender of free speech. Bullied by the Turkish government, Facebook bows down to most requests for censoring political content and thereby avoids longer nationwide bans. In 2012, an angry and underpaid content editor leaked internal Facebook documents, which had instructed that any content unfavorable to Ataturk, founder of Turkish Republic, and posts favourable to PKK, an outlawed Kurdish militant group in Turkey, should be censored by Facebook editors. Indeed, there were many reports that politically active Kurds had their pages removed multiple times, and the company went so far as to remove Turkey’s main pro-Kurdish opposition political party’s Facebook page.

Beyond nationwide blocks and throttling access to social media, Turkey pushes for more sinister ways of censoring content as well. After the October 2015 Ankara bombing, Instagram reportedly removed certain pictures tagged with Turkish cities based on “community guidelines.” So did Twitter after an April hostage taking situation in Turkey. But having fought against hundreds of court orders from Turkey, Twitter’s legal team is experienced enough to detect political censorship and revert the decision on some of the censored content when approached by reason.

But Turkish social media users are even more experienced in their fight for freedoms. Against Facebook’s PKK censorship, a citizen network developed cryptic ways to deliver news: An editor told me that since they are blocked from reporting directly about PKK, they instead spell it as ‘KKP’ and circumvent the ban. Kurdish Twitter users, most of whom have multiple government requests for banning their accounts, slightly alter their Twitter handles after each court order (e.g. ‘@DailyDott’ or ‘@DailyyDot’) and thereby override Twitter’s obligation to implement the court order.

Regarding the ban on news websites, a cat and mouse game is in play. Dicle News Agency, known for its established network of reporters in the war-torn Kurdish regions, had recently “celebrated” their 41st new domain name since government’s censorship spree last summer. By using different combinations of their name and using all available ccTLD’s and gTLDs (including .xyz, .link and .win), the agency avoids the ban through multiple mirrors, which are announced through its social media accounts until those domains are censored. Another banned news portal, Sendika, has been using ascending numbers in their URLS—such as ‘Sendika10.org.’ And editors expect readers to find the new domain easily if they are faced with a blank white page when they visit.

While all these methods help to overcome increasing censorship, there are problems that they cannot overcome. When, for example, the Turkish government seized an opposition daily, Zaman, the newly appointed pro-government editor’s first act was to delete Zaman’s online archive completely from the web. (Thankfully, there is Internet Archive’s Wayback Machine, which can retrieve most of the lost archives of the daily.)

Although Turkey’s censorship machine makes the most stupid mistakes, it is sophisticated enough to help Erdoğan win elections—but Turkish internet users all around the world always make sure that he at least loses face.