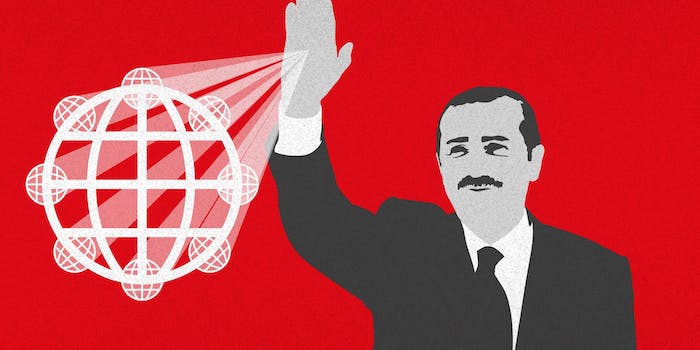 The website of Dutch public broadcaster NOS.nl has been inaccessible in Turkey since Dec. 19. After a full week of investigations, however, all we know is who in the country’s censorship bureaucracy blocked the access, but not why. Further, the fact that NOS.nl was censored before a judge issued a court order reveals the new extrajudicial functions of Turkey’s censorship machine, which includes integrated servers between private Turkish ISPs and Turkey’s government.

The access ban on NOS.nl was first reported on Dec. 21 by the NOS itself, which has a correspondent in Turkey, Lucas Waagmeester. Waagmeester says none of the Turkish authorities he spoke with confirmed that the broadcaster was blocked, let alone why.

Sources inside Turkey’s internet censorship mechanism, who spoke to the Daily Dot on the condition of anonymity, confirmed that there was indeed no court order or an administrative order from Turkey’s internet authority (BTK) sent to internet service providers in the first week of the block.

As censorship monitoring group @TurkeyBlocks reported, however, a ban on NOS went into place on Dec. 19, with Turkish ISPs not loading the NOS homepage or redirecting it to a blank page.

To understand how widely the ban was implemented, we asked users in Turkey to attempt to access NOS.nl. They reported that the NOS.nl website is blocked by all of the largest ISPs on fixed-line, cable, satellite link, and mobile connections.

BTK did not respond to multiple requests for comment, and the union of internet service providers, ESB, confirmed via email that there was no court order received by the union regarding the censorship of NOS’s website prior to the ban. The Turkish internet service providers that reportedly blocked NOS (Turk Telekom, Turkcell, Turksat/Kablonet, Vodafone, and DSmart) did not respond to our request for comment at the time of publication.

According to Waagmeester’s earlier report from Turkey, some sources in the capital suggested that the access ban might have been issued because of an NOS news video (viewer discretion advised) on the assassination of Russian Ambassador to Turkey, Andrei Karlov, by a Turkish police officer. Following the assassination, Turkish ISPs promptly blocked access to social media, and the prime minister’s office issued a gag order on “any news, image or commentary regarding the assassination other than the official press statements.” That gag order was later extended to a full media blackout on the investigation.

NOS states that they received the video of Ambassador Karlov’s assassination from TRT, the Turkish public broadcaster. There are multiple sources, including from Al Hadath TV channel, showing the video with TRT logo on live broadcast.

TRT video footage of moment of assassination of Ambassador Karlov – who has since been confirmed dead. pic.twitter.com/oYhpDPkLTa

While Turkish officials and internet companies have still not responded to our questions, the internet authority’s inquiry page suddenly updated on Dec. 28 to display a local Ankara judge’s order for “NOS.nl” dated Dec. 20.

There are multiple issues with Turkey’s ban on NOS: There was no banning order provided to the public nor to the journalists for a full week despite ISPs started to implement the ban; an administrative order and, later, a judge’s order were eventually given as the legal basis for the ban—after the ban’s actual implementation; and lastly, the whole NOS website is banned despite the fact that it is possible to ban individual pages instead, thanks to wide use of deep packet inspection by Turkish ISPs as a censorship tool.

A 2015 amendment to Turkey’s Internet Law (PDF) authorized the government to issue administrative orders on the grounds of “national security and public order; crime prevention; or public health protection.” The law also allows the authority to ban the whole domains if the banning of an individual web page is not possible (such as for websites that use a secure HTTPS connection). However, the government’s internet authority, BTK, must submit all banning orders to a judge for review within 24 hours of it going into effect. If the judge does not approve the ban within 48 hours, the ban shall be lifted, effectively limiting the duration of administrative bans to a maximum of three days.

The NOS website does not use HTTPS authentication, which would make it possible to block only the URL address of just the news video instead of the whole website. And while Turkey has banned Russia’s Sputnik News for retaliation before, banning another country’s broadcaster without a clear motive is unusual, even for Turkey.

Given the problematic timeline of the NOS ban and its extraordinary nature, the Daily Dot consulted with two people inside the Turkish telecommunications sector who are familiar with the technologies that Turkish ISPs employ to implement censorship orders. We have granted them anonymity for fear of reprisal.

As both of these sources independently verified, Turkish ISPs implemented the ban on NOS.nl without receiving a court or an administrative order. Instead, the block took place because Turkey’s government is using integrated servers that directly syncs the list of blocked URLs and domain names to all ISPs’ infrastructures. “NOS.nl” was entered into the government’s censorship database before the actual administrative order was released, according to the Daily Dot’s sources, making ISPs censor NOS before they received a blocking order.

Yaman Akdeniz, a law professor at Istanbul Bilgi University who led various legal challenges against Turkey’s nationwide internet bans, compares this integrated censorship system to an antivirus software that regularly updates its virus definitions from a central server. Akdeniz tells the Daily Dot that there are, as of this writing, 102 “carbon copy” court orders that approve government-issued censorship with no objections—and in all cases, the censorship was implemented by ISPs before the judicial review.

When asked about the legality of direct censorship by integrated servers, Serhat Koç, a jurist and former member of Turkey’s Pirate Party, says the order in which domains are censored is likely illegal. “This is certainly not legal,” Koç says, “but what is left legal anyway?”

Akdeniz adds that the same integrated database is used to implement BTK’s administrative orders on so-called catalog crimes, such as “obscenity,” which do not even require judicial review. Gökhan Ahi, a cyber-rights lawyer, concurs, saying he believes these servers were installed back in 2008 for the catalog crimes. A 2015 analysis found 71,064 domains censored in Turkey for “obscenity.”

Turkey’s internet authority has rejected freedom of information requests for the list of URL addresses censored in Turkey, claiming that preparation of such a list would require additional research.