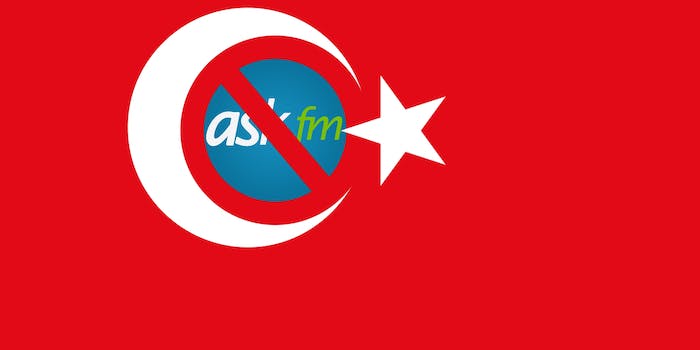 YouTube is back, but now Ask.fm may be blocked in Turkey

Videos are in. Teenager Q&As are out.

The Turkish newspaper Milliyet reported Monday that the site had been blocked by the country’s Telecommunications Authority (TIB), and showed the TIB’s announcement saying as much, though there was no court order instructing it to do so. Reports from within Turkey are varied, with some users reporting it blocked and others still able to access it, though it’s possible that that’s just the effect of Internet providers not being able to roll out a full ban at once.

The TIB, similarly, had blocked YouTube for 67 days until Tuesday, though a court had ruled against the move back in April. The ban was reportedly an attempt to block Turks from hearing a secret recording of top officials discussing, among other things, their increased chances of keeping their jobs after this summer’s elections if the country went to war with Syria. While the country’s ruling AK party didn’t dispute the recordings, it did claim they were unfairly spliced together.

Ask.fm is a site often used by younger people to ask one another questions; it’s not yet clear what the TIB found objectionable there, and the company didn’t respond to request for comment. But insight should come by Wednesday. By law, Turkish courts can intervene if a site is blocked for more than 48 hours.

Update: A spokesperson for Ask.fm told the Daily Dot that it has noticed a decrease in Turkish traffic, but it has not received any notice from the Turkish government.