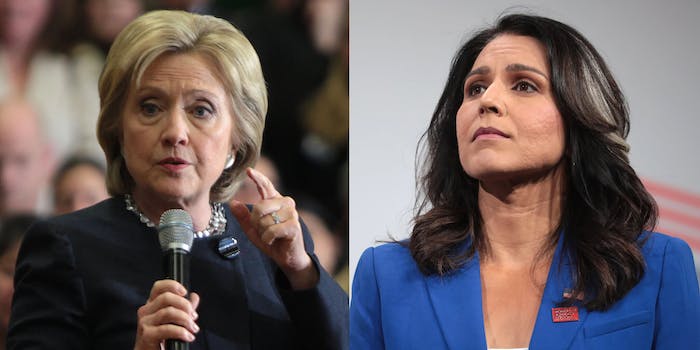 In what is most assuredly a publicity stunt with no chance of victory, a way to get her name in the news with the first votes in Iowa a few weeks out, Rep. Tulsi Gabbard (D-Hawaii) is suing Hillary Clinton for remarks she made on a podcast.

The news was first reported by Ed O’Keefe of CBS on Wednesday morning.

The Clinton-Gabbard feud began in the wake of several stories that reported Russian bots/trolls/boogeymen had promoted Gabbard in the wake of the debates.

Clinton went on David Plouffe’s podcast and said that Gabbard was a favorite of the Russians, and that “they” are grooming her for a third-party run.

After the comments sparked an explosion online, Gabbard offered a fiery denunciation of Clinton, calling her, among other things, the world’s worst “warmonger.”

Clinton later tried to walk back the comments, saying she meant Republicans wanted Gabbard to run as a third-party, despite the fact that after the initial news, her spokesperson had endorsed the Russia angle, saying “if the nesting doll fits.”

In a statement released by her campaign, Gabbard said that “Clinton deliberately and maliciously made false statements in an attempt to derail Rep. Gabbard’s campaign, by alleging that Gabbard is a ‘Russian asset.’”