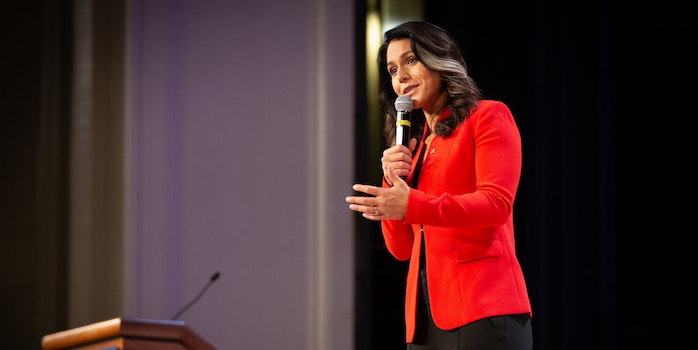 In Tulsi Gabbard’s most Tulsi move yet, she voted ‘present’ at impeachment

People are freaking out.

Over the course of the 2020 primary, Rep. Tulsi Gabbard (D-Hawaii) has made enemies of Mayor Pete Buttigieg, Sen. Kamala Harris (D-Calif.), Hillary Clinton, Rep. Tim Ryan (D-Ohio), and a bevy of other Democrats for her brain-breaking stances on a number of mainstream issues.

Now, she’s taken the most antagonistic, trolly position against the Democratic party yet, with her vote of “present” over the articles of impeachment against President Donald Trump.

Trump was impeached last night, with a vote essentially down party lines on two articles.

Gabbard chose not to side with Democrats or Republicans on the matter, instead choosing to note that she was there and nothing more.

A house divided cannot stand. Sadly, our nation is terribly divided. My vote today is a vote for much needed reconciliation and hope that together we can heal our country to usher in a bright future for the American people, our country, and our nation. #Impeachment #TulsiGabbard pic.twitter.com/BJddNuhkk7

In a video, Gabbard called her decision a vote for “reconciliation” and “hope.” But that was not the message many received. Notably, from Rep. Alexandria Ocasio-Cortez (D-N.Y.), who said it was cowardly to not take a position.

“Today was very consequential,” Ocasio-Cortez said. “And to not take a stand one way or another in a day of such grave consequence to this country is quite difficult. We’re sent here to lead.”

On Twitter, #VotePresentLikeTulsi trended, with some enjoying the lackadaisical energy she was exuding at a critical point in U.S. history, and others baffled and upset.

Also present was the evergreen theory that Gabbard is a Russian bot, given a reticence to punish Trump with her vote.

Are dictators who use chemical weapons against their own people bad?

i can't wait for President Gabbard.

In other Gabbard news, she has announced she will not be attending Thursday’s debate.

Gabbard did not qualify and was not invited. But nevertheless, she wants you to know she wouldn’t have gone anyway.