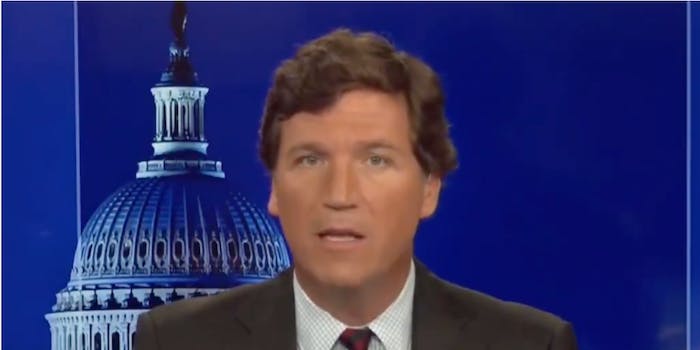 His yearbook entry is getting called out online.

Under a college photo of Carlson, the conservative news pundit aligned himself with the “Dan White Society,” seemingly named after the man who assassinated San Francisco Mayor George Moscone and Supervisor Harvey Milk in 1978. Milk was the first openly gay official in California.

Trinity College, where Carlson went to school, confirmed the authenticity of the yearbook page to the Wrap, but added that the “Dan White Society” didn’t seem to exist at the school.

The yearbook photo surfacing now has the internet calling out Carlson for his college role models.

But, that wasn’t all of it. Carlson was also recognized with the “Jesse Helms Foundation,” which seems to be named after former Sen. Jesse Helms (R-N.C.), who was notoriously anti-LGBTQ and anti-civil rights.

“Perhaps this is the story that @TuckerCarlson was trying to get ahead of. In his college yearbook, he listed himself as a member of the ‘Dan White Society.’ Dan White was the man who murdered Harvey Milk,”

Akers appeared to be referring to a recent segment on Carlson’s show where he tried to address his “dusty old yearbook.” Carlson said a story was being crafted by a “mentally unbalanced man,” who he said was Washington Post media critic Erik Wemple.

“Certainly sounds like Tucker is trying to get ahead of an embarrassing story here,” Daily Beast Editor Justin Baragona tweeted earlier this week.

Meanwhile, people on Twitter are calling out Carlson for the yearbook’s association with anti-LGBTQ figures.

“I mean … I guess it’s too easy to think maybe the vast majority of these guys are deeply self hating closeted gays? Doesn’t matter if they are anyway – not an excuse AT ALL – but one does wonder! Also fuck them all forever, closeted or not. The Dan White Society. Bye,” comedian Billy Eichner tweeted.

“There’s something SERIOUSLY wrong with Tucker Carlson,” another person tweeted.

“Horrifying: It appears Tucker Carlson was in a fan club for a homophobic double murderer. Mystifying: Why the microscopic bow tie?” another person added.

Other than the attack on Wemple, Carlson has yet to address his college extracurricular activities.