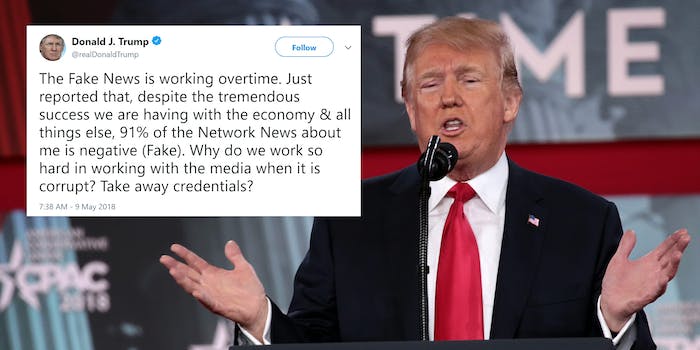 Where did this number come from?

Today, in his ongoing war with the establishment press, President Donald Trump floated the idea of taking away media credentials, saying his administration should not work with reporters since 91 percent of the news they produce is fake.

“The Fake News is working overtime,” the president tweeted. “Just reported that, despite the tremendous success we are having with the economy & all things else, 91% of the Network News about me is negative (Fake). Why do we work so hard in working with the media when it is corrupt? Take away credentials?”

The Fake News is working overtime. Just reported that, despite the tremendous success we are having with the economy & all things else, 91% of the Network News about me is negative (Fake). Why do we work so hard in working with the media when it is corrupt? Take away credentials?

Trump’s tweet exposes the veneer shrouding his “fake news” criticisms, confirming that he believes any negative news about him, regardless of its veracity, is fake.

But where does Trump’s 91 percent figure come from? Well, it’s from the Media Research Center, a conservative think tank dedicated to “exposing and combating liberal media bias.”

They published a new study about mainstream media coverage of Trump.

“The Media Research Center studied all broadcast evening news coverage of the President from January 1 through April 30, and found 90 percent of the evaluative comments about Trump were negative.”

Percentage-point difference aside, that’s not the first time the center has found a shockingly large percentage of negative news aimed at the president. A 2016 study of the months after the Republican National Convention found that news coverage of Trump was overwhelmingly negative.

It’s a number the organization has repeatedly touted.

In September of 2017, in a post called the “Liberal Media’s Summer of Pummeling Trump,” it found again that 91 percent of Trump coverage was in a negative light.

Analyzing the networks’ spin makes it clear that the goal of all of this heavy coverage is not to promote the President, but to punish him. In June, July and August, broadcast evening news coverage of Trump was 91 percent negative — worse than the astounding 89 percent negative spin we calculated during the first three months of the administration, usually a traditional honeymoon period for new presidents.

Those numbers only take a look at ABC, CBS, and NBC, and thus do not include the positive press Trump receives from Fox.

That said, even looking at more balanced studies, Trump is not wrong that the coverage of this presidency has been overwhelmingly negative.

But that doesn’t mean any of it’s fake.