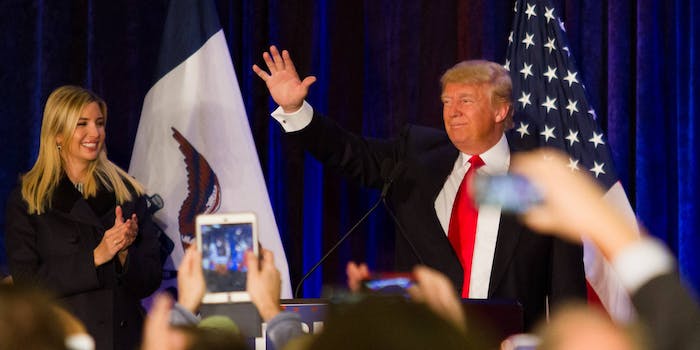 The cabinet is worth $14.5 billion and counting.

In a speech in Iowa during his ‘Thank You’ Tour, President-elect Donald Trump trashed criticism leveled at him for his preference in choosing only the super-rich to be on his cabinet.

“A newspaper criticized me and said, ‘Why can’t they have people of modest means?’” Trump said to the crowd. “Because I want people that made a fortune!”

Pres.-elect Donald Trump on why he doesn't appoint people of 'modest means': "I want people that made a fortune." https://t.co/MHeCcYKAPa

Currently, the Republican’s cabinet choices are all millionaires or billionaires with a combined worth of $14.5 billion. In justifying his decisions, Trump explained that he wanted the best negotiators and business people to operate on behalf of the electorate. He went on to compare his selection process to that of picking a sports team.

“It’s no different than a great baseball player or a great golfer,” he said. “These people have given up fortunes of income in order to make a dollar a year, and they’re so proud to do it—and you watch, you watch what’s gonna happen. It’s gonna happen fast, too.”

The speech came the same day that Trump announced that Linda McMahon, former CEO of the WWE turned Republican politician, would run the Small Business Administration. McMahon boasts a net worth of $500 million, leaving the wrestling and entertainment company to pursue a career in politics in 2009. While she may have successfully helped run the world’s biggest professional wrestling franchise, her suitability as top pick politician is less assured. McMahon’s career amounts to two failed consecutive senatorial bids in 2010 and 2012.

There are other interesting picks on the administration’s roster. Trump’s Treasury secretary pick, Steven Mnuchin, is a Wall Street banker who had 17 years experience at Goldman Sachs before he started his own hedge fund in 2002. Mnuchin is worth an estimated $40 million. Billionaire education secretary pick Betsy DeVo inherited her wealth. The incoming secretary of the Labor Department, Andrew Puzder, runs CKE restaurants—a company that manages fast-food chains including Hardee’s and Carl’s Jr. He earns just $4 million but boasts a personal fortune worth hundreds of millions.

Mnuchin’s experience in the financial industry and that Puzder’s business experience will likely influence how they operate in their new roles. However, these picks run counter to Trump’s campaign trail populism—ranting against big banks and claiming to work for the ordinary working person.

Mnuchin comes straight from Wall Street and Puzder has consistently opposed the living wage for workers. Trump was condemned by unions and labor organizations who actually called his appointment of Pudzer a blow to “working families, including those who elected him.”

If money maketh the man, as Trump alluded to in his Iowa speech, then these ‘athletes’ fit the bill with their vast fortunes. However, the cabinet shaping up to be something other than what Trump promised ordinary voters during the election campaigns.