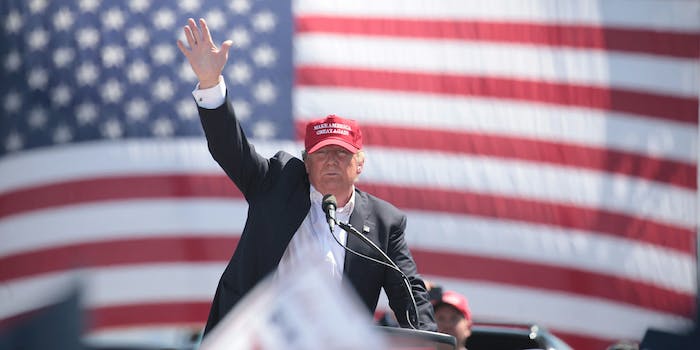 America’s reputation has plummeted across the globe since President Donald Trump took office earlier this year, according to a new poll.

The poll, conducted by Pew Research Center, questioned people in 37 countries and found that Trump and his key policies have led to a nosedive in people’s confidence and general attitudes toward the United States.

Similarly, the proportion of people viewing the country as “unfavorable” has jumped from 26 percent at the end of Obama’s presidency to 39 percent under Trump.

Of all of the 37 countries surveyed by Pew Research Center, only two countries tended to have a more favorable view of Trump’s ability to do the right thing when it comes to world affairs: Russia and Israel. Russians’ confidence in the U.S. president to do the right thing regarding world affairs jumped considerably, rising from 11 percent for Obama to 53 percent for Trump.

Views of the United States have soured considerably among nations typically considered allies including Germany, the United Kingdom, France, Canada, and Japan. Germany in particular had no confidence in Trump, sinking from 86 percent of people trusting the U.S. president down to just 11 percent.

The world’s view of Trump’s personal traits are equally damning, according to Pew’s findings. Overall, 75 percent of respondents view Trump as arrogant, 65 say he is intolerant of others, and 62 percent see him as dangerous. Although 55 percent said he is a strong leader, just 26 percent believe he is well-qualified to be president, and only 23 percent believe he cares about ordinary people.

Trump doesn’t measure well compared to other world leaders, either.

According to Pew’s poll, Russian President Vladimir Putin has higher favorability ratings around the world (27 percent) compared to Trump (22 percent). Meanwhile, German Chancellor Angela Merkel had the highest marks, coming in at 42 percent.