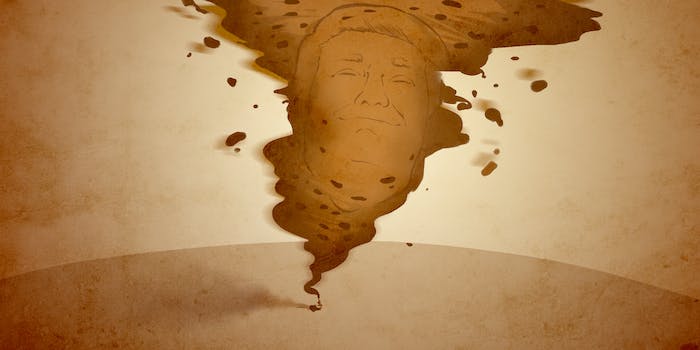 There are plenty of ways people have described Donald Trump. But former Breitbart News editor Ben Shapiro may have just invented the most memorable one of all.

“As you probably know, I think Donald Tramp is a turd tornado,” Shapiro told CNN on Wednesday, “but I also understand that he has no capacity whatsoever to control himself and be the sort of staid politician that so many people want him to be.”

In which @benshapiro calls Donald Trump a “turd tornado” on CNN pic.twitter.com/zi0jXsjFvw

Shapiro has been sharply critical of Bannon since his departure from Breitbart in March. In an article for the Daily Wire, where Shapiro now serves as editor, Shapiro gave his take on Bannon’s rise to the top of the Trump campaign, painting Bannon as viciously ambitious.

“Many former employees of Breitbart News are afraid of Steve Bannon. He is a vindictive, nasty figure, infamous for verbally abusing supposed friends and threatening enemies,” Shapiro wrote. “Bannon is a smarter version of Trump: He’s an aggressive self-promoter who name-drops to heighten his profile and woo bigger names, and then uses those bigger names as stepping stools to his next destination. Trump may be his final destination. Or it may not.”

Shapiro’s characterization of Trump comes amid speculation that the Republican nominee’s hiring of Bannon will usher in a no-holds-barred version of Trump that embraces the divisive rhetoric for which his campaign has become known, for better and worse.

After Shapiro’s criticism of Trump, CNN host Brianna Keilar asked him to clarify his remarks. “A what tornado?” she asked. Shapiro did not mince his words.

“A turd tornado,” Shapiro replied without hesitation. “It’s like a ‘Sharknado’ except with poop.”