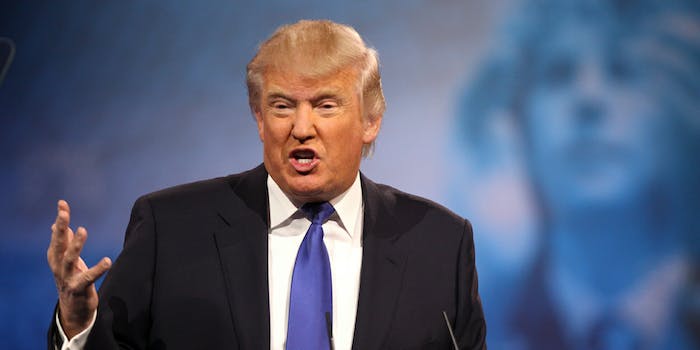 'Someone said 'treasonous.' I mean, yeah, I guess why not?'

President Donald Trump suggested on Monday that Democrats who did not react positively to his State of the Union speech last week were “treasonous” and “un-American.”

Speaking at a manufacturing plant in Cincinnati, Ohio, Trump was lamenting the lack of enthusiasm from Democrats at the State of the Union last week when he said they were “like death” and there was “bad energy.”

“You have the other side, even on positive news—really positive news like that—they were like death and un-American,” Trump said. “Someone said ‘treasonous.’ I mean, yeah, I guess why not? Can we call that treason? Why not?”

Trump likens the reaction of Democrats during State of the Union to "treason," says it's "un-American." (via ABC) pic.twitter.com/cdOhzVVAel

The speech was billed as a way to tout the GOP-led tax bill.

Several Democrats did not stand or clap during Trump’s speech—particularity when Trump spoke about his immigration policies.

The speech was criticized by liberals online when Trump touted unemployment numbers for several communities of color, noting that the rate of unemployment had been going down during former President Barack Obama‘s time in office.

However, conservatives seemed extremely happy with Trump’s speech, with some right-wing personalities calling it “amazing” and “visionary.”

Trump’s speech on Monday was held at Sheffer Corp., a hydraulics company that gave employees bonuses after the GOP tax bill was enacted.

“There’s never been a better time to hire an American, invest in America, and start living the American dream,” Trump said during his speech.