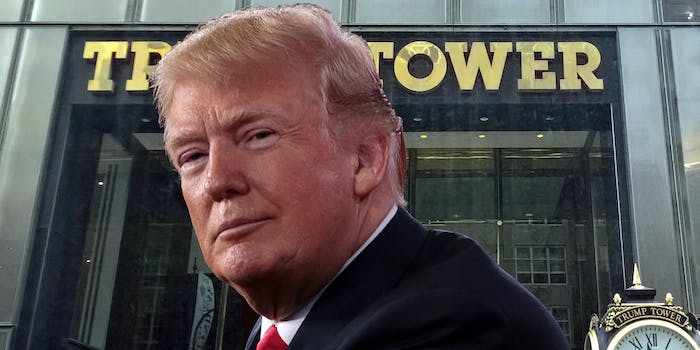 Trump tweeted about the fire—but did not mention the victim.

Over the weekend, a man passed away in a fire at Trump Tower in New York. The president, in response, for some reason, bragged about the quality of the building.

Trump did not mention the person who passed, 67-year-old Todd Brassner.

But according to a friend of Brassner, Trump had once spoken out about him, calling him a “crazy Jew.”

Patrick Goldsmith, an art dealer like Brassner, told the New York Daily News that Brassner “despised” Trump, hated living in the building, and fought with him over a broken sink.

A fellow art dealer, Goldsmith said he heard the vile remark in 1996 as he entered the building and passed by the exiting Trump. Goldsmith, who like Brassner opposes the President, took the opportunity to glance at Trump’s petite hands — which gained notoriety in the late 1980s and suffered another wave of scrutiny during the 2016 presidential campaign.

Trump reportedly became enraged when he caught Goldsmith staring and demanded the gawker’s identity from his doorman, Goldsmith said. The doorman said Goldsmith was headed to the 50th floor to see Brassner.

“Oh, that crazy Jew?” Trump asked, according to Goldsmith.

In a statement, the White House called the story absurd.

“Basing a front-page story maligning the President solely on a decades-old unverified claim by a critic of the President—whose own family members are Jewish—is absurd,” said deputy press secretary Raj Shah.

However, claims of anti-Semitism have long dogged Trump and have only persisted since he took office.

On the campaign trail, the president tweeted out a meme with anti-Semitic undertones. In office, his first statement on International Holocaust Remembrance Day made no mention of Jewish people, and he infamously defended neo-Nazi protestors at the riots in Charlottesville.