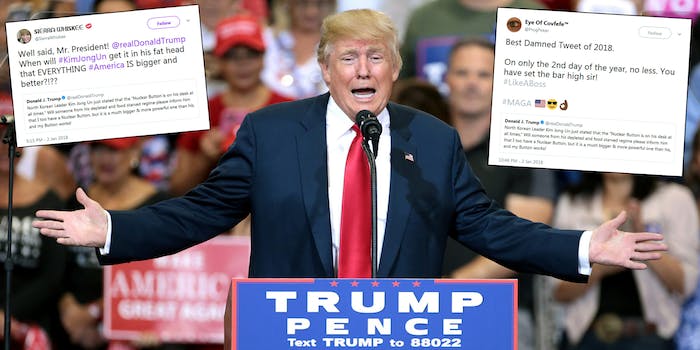 Some people are really loving it.

On Monday night President Donald Trump continued to escalate the war-of-words with North Korea by comparing the size of his nuclear button with the secluded nation’s leader Kim Jong-un.

Jong-un said in his annual New Year’s Day address that North Korea had nuclear capabilities to strike anywhere on the mainland of the United States and there was a “nuclear button” on his desk.

Trump, however, wanted to point out that his button was bigger and stronger.

“North Korean Leader Kim Jong Un just stated that the ‘Nuclear Button is on his desk at all times.’ Will someone from his depleted and food starved regime please inform him that I too have a Nuclear Button, but it is a much bigger & more powerful one than his, and my Button works!” Trump wrote.

The Monday tweet is just the latest in what has been a months-long back-and-forth of escalating rhetoric between the president and North Korea. Last year Trump threatened to “totally destroy” North Korea and has repeatedly called Jong-un “rocket man.” The aggressive threats from Trump started in August when he responded to threats from North Korea by saying the United States would unleash “fire and fury” on the nation.

While many people reacted in horror at the idea that the president was goading a nuclear-capable nation on Twitter—and even reporting Trump’s tweet as a violation of Twitter’s terms of service—some of Trump’s most ardent supporters online were celebrating his stance against North Korea.

On Twitter, many of his supporters seemed to think the aggressive rhetoric was a sign of strength by the president.

This classic Trump tweet serves 2 purposes.
1. It lets Kim & world know Trump is not a pipsqueak like Obama.
2. It'll have the media freaking out today so that Trump can accomplish or announce something quietly.
His diversionary tweets work brilliantly.https://t.co/ZDLtex6p3N

Well said, Mr. President! @realDonaldTrump
When will #KimJongUn get it in his fat head that EVERYTHING #America IS bigger and better?!?? https://t.co/3XbOqzeEWb

Meanwhile, on r/The_Donald, the notorious pro-Trump community on Reddit, several threads about the tweet were among the top discussions on the forum. Some of the threads were named “We have the biggest buttons” while another claimed that the president’s tweet was the catalyst for North Korea opening a border hotline with South Korea.

“I can’t even believe this is real. This is levels of winning I never expected, and to be honest I’m not sure I’m prepared,” wrote PaineTrain1776.

According to CNN, North and South Korea opened a dialogue on a hotline that had been dormant for the past two years. The North Koreans called the line hours after the president’s tweet, but the two nations communication was reportedly in response to Kim Jong-un’s proposal on New Year’s Day to send North Korean athletes to the Winter Olympics in South Korea in February. South Korea only announced that, during the call, technical issues with the connection on the hotline were discussed.

However, pro-Trumper were convinced that North Korea’s decision to open the border phone was due to the president’s tweet.

Some on r/The_Donald users were convinced the tweet “broke” Jong-un.