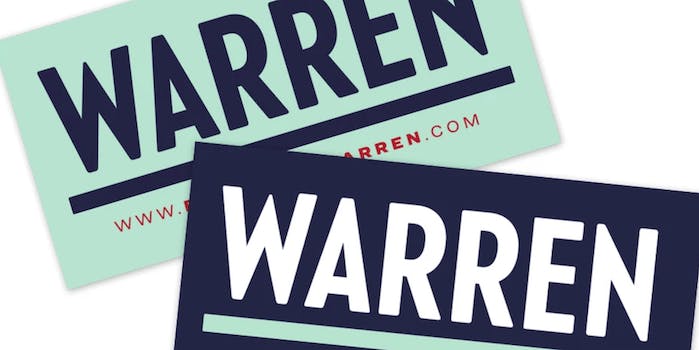 The alleged victim was 18.

A supporter of President Donald Trump was arrested in Moorhead, Minnesota, on charges associated with allegedly brandishing a loaded handgun at a woman in an altercation over her Elizabeth Warren bumper sticker.

According to a release from police, around noon on Monday, 27-year-old Joseph Schumacher pulled alongside an 18-year-old woman and started yelling about her sticker. Pointing to his Trump bumper sticker, he continued talking about his different political views.

The verbal confrontation continued as he proceeded to follow her for several blocks, police say, during which time they passed one another several times.

The man allegedly drove in front of her and held up a gun before driving away. She subsequently called 911.

Upon their arrival, police located Schumacher eating at a local restaurant, the Star-Tribune reported. A search of his car turned up a loaded handgun, they say, and he was arrested on two counts of felony terroristic threats and a misdemeanor charge of having a loaded weapon in a vehicle without a permit.

One of the two passengers in the man’s vehicle reportedly confirmed the events.

The story has reminded some of the efforts liberals take to avoid inciting the self-proclaimed tolerant right. “What a little snowflake, triggered by a bumper sticker? Fragile. Sad!” said one redditor on a thread about it.

“And this is why I won’t risk putting political stickers on my car. It’s wrong. I hate feeling like I’m giving into them, but the MAGAnuts are dangerous,” one woman tweeted in response.

Prominent Trump critic Holly Figueroa O’Reilly, founder of Blue Wave Crowdsource, tweeted that the incident was “the real-life version of my Twitter mentions.”

@DanCrenshawTX @MeghanMcCain This one is super fun for me! Why? It’s my hometown! Soooo cool it’s in the news! This guy seems awesome and should totally have a gun!! I mean, how else could he intimidate this woman? With his smarts? Lol!!!

According to county records, as of late Wednesday morning, Schumacher remained in jail.