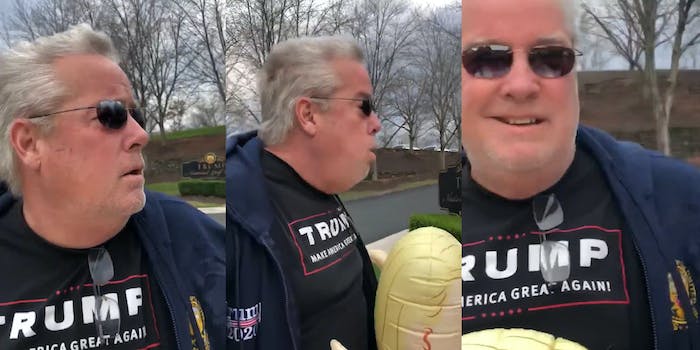 A video of the incident went viral.

A 61-year-old supporter of President Donald Trump was charged with misdemeanor assault after he was shown on video exhaling on two women outside of the Trump National Golf Club in Virginia.

The man, Raymond Deskins, was changed with misdemeanor assault, according to the Associated Press.

A video of Deskins blowing on two women outside of the golf club went viral over the weekend.

In it, Deskins—who is wearing a Trump sweatshirt and what looks like a Trump-themed pool float—approaches two women who appear to be protesting outside Trump’s golf club. He is not wearing a mask, which is recommended as a way to help slow the spread of COVID-19.

The video begins with Deskins confronting the protesters as they say “get away from me.” He then proceeds to say that he isn’t getting in “anybody’s face” as he gets closer to another woman, who isn’t seen.

As he gets closer, a woman tells him he doesn’t have a mask on and needs to “back off.” In response, the video shows Deskins taking a deep breath and exhaling in the direction of the woman.

“I breathed on you!” he replies, as he walks away.

In an interview with NBC4 Washington, Kathy Beynette said she was protesting with another woman outside of the golf club on Saturday when “the guy came over from across the street, came charging across the street.” She added that he “just proceeded to assault us by taking a deep breath and doing a very powerful exhalation on both of us.”

The video ends with Deskins saying to “call the cops.”

In a tweet on Sunday evening, the Loudoun County Sheriff’s Office said they were aware of the video.

“As the incident was not witnessed by law enforcement and the video did not capture the entire interaction, an investigation was conducted on scene and both parties were advised they could go to a Loudoun County Magistrate and seek a citizen obtained warrant,” the sheriff’s office said in a statement.

The sheriff’s office added that Deskins was charged after a citizen obtained a warrant through a magistrate.