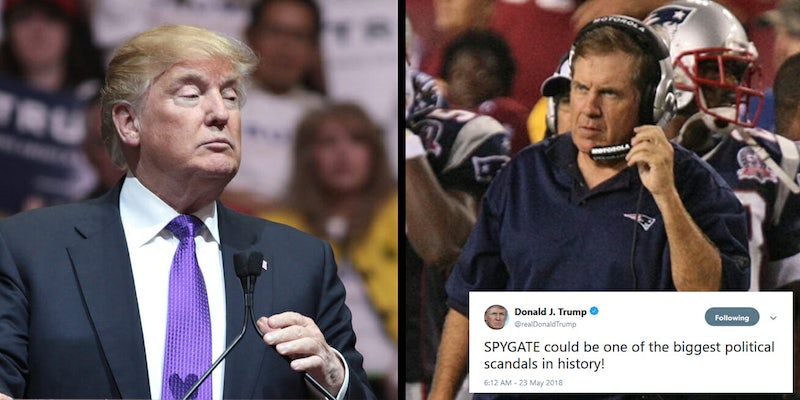 On Wednesday morning, President Donald Trump tried to assign a nickname to what he believes is a scandal involving the FBI having an informant in his campaign during the 2016 presidential election. Too bad that name’s taken.

In a series of tweets, Trump railed against a “spy” in his campaign and blasted the “criminal Deep State” for trying to surveil his campaign. At the end of the Twitter rant, Trump called the situation “spygate,” which garnered a torrent of reactions.

Many people quickly reminded the president that the term “spygate” has already been used to name a scandal involving the New England Patriots football team several years ago. The Patriots were disciplined by the National Football League for videotaping coaches from the New York Jets during a game in September 2007 from an area of the field where they were prohibited from doing so. The team had to pay fines and give up draft picks for violating league rules.

The president should be familiar with the term, considering his ties to numerous high-profile members of the Patriots organization. Quarterback Tom Brady has golfed with Trump, Patriots owner Robert Kraft is known to have a close relationship with the president, and coach Bill Belichick was recently named to the President’s Council on Sports, Fitness, and Nutrition.

What a weird time to be picking on the New England Patriots https://t.co/MDjYJkftwJ

Spygate wasn’t that political, the New England Patriots were caught videotaping the Jets’ signals. I mean it’s the Jets…. https://t.co/n72Nnv1s4O

Uh dude, there already WAS a Spygate.

I KNEW that whole NE Patriot spying thing was a big deal.. POTUS said so! https://t.co/HTL4GfXWLl

But Patriots-related jokes weren’t the only thing people mocked. Some Twitter users thought “Spygate” sounded like an action thriller that would be hitting theaters this summer.

If there is ever a movie made about Spygate, Alex Baldwin would make a great Comey.

The next Patriots-related scandal in football was called “Deflategate.”

Will Trump use that nickname next?