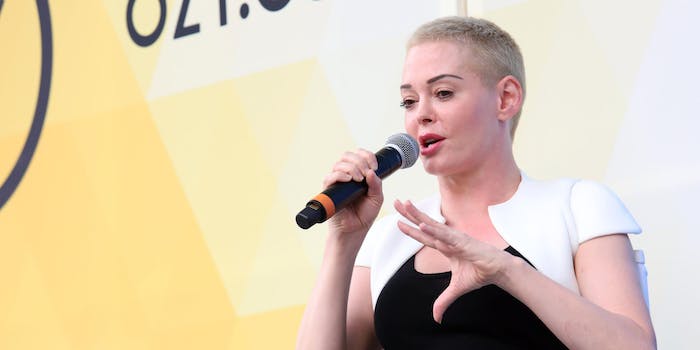 'It might be simpler & clearer to declare yourself an independent.'

A recent drone strike in Iraq has American opinions split.

On Thursday, the Pentagon confirmed that a drone strike ordered by President Donald Trump struck Baghdad airport and killed a top Iranian official. As news of the strike spread, Republicans and Democrats took to the web to voice their support—or condemnation—of the act. Democrats largely criticized the move, expressing their concern over the consequences. Republicans, on the other hand, largely praised the president’s move.

Then there was Rose McGowan.

She sided with neither Democrats or Republicans, and instead blasted off a series of tweets that baffled everyone. What began with a nearly universally disliked tweet aimed at Iran turned into a several-hours-long tweetstorm.

Just before midnight on Thursday, McGowan began. Directing her words at Iran, the 46-year-old Charmed actress apologized for the death of Qasem Soleimani—head of the Islamic Revolutionary Guards Corps Quds Force. “The USA has disrespected your country, your flag, your people. 52% of us humbly apologize. We want peace with your nation,” McGowan wrote. “We are being held hostage by a terrorist regime. We do not know how to escape. Please do not kill us. #Soleimani.”

People quickly flocked to the tweet, which has been soundly ratioed in the hours since its posting: In just over seven hours, the tweet has gained only 5,200 likes and 1,200 retweets as opposed to its nearly 12,000 replies. In the comment section, people made their opinions on McGowan’s statement clear. “May the ratio you get here scare you off the Internet for the rest of your spectacular (sic) ignorant life,” one commenter wrote.

May the ratio you get here scare you off the Internet for the rest of your spectacular ignorant life.

"wE aRe BeInG hElD hOsTaGe!!!"

She says from a nice big house in a good neighbourhood, with the money and resources to travel anywhere on the planet.

McGowan spent the next several hours on Twitter, responding to her critics and buckling down on her statement. “Of course #Soleimani was an evil evil man who did evil evil things,” she wrote less than 20 minutes following her original tweet. “But that at this moment is not the fucking point. The United States is morally corrupt and acts illegally. It is only logical to appeal to Iran’s pride by apologizing. I’m taking one for the team.“

“I do not side with Iran, but I most definitely do not side with the USA,” she wrote in another tweet. Then, less than an hour after her first tweet started making waves, McGowan’s Twitter feed went into overdrive.

She followed her original tweets with a starkly political post, which she quickly reversed upon. “I’m a registered Republican in California. I loathe the Clintons. I hate Trump,” she wrote. “I will not vote Republican, but I cannot vote Democrat. I’d rather know what evil I’m getting, so I’ll go Republican. This is about WWIII, so none of that shit matters anyway.”

Mere minutes after posting her “Republican vs Democrat” tweet, McGowan followed it with another, seemingly contradictory statement. “I will never vote Republican. I want the Democrats to win because we are less likely to die,” she said. “I am a conscientious objector to the USA, it’s policies, lies, corruption, nationalism, racism, and deep misogyny. It is our right and duty as citizens to dissent.”

McGowan apparently decided to end the night there. After pinning her final tweet to her page, she seemingly signed off for the evening. Meanwhile, her immensely disliked Iran tweet is continuing to rack up its ratio, as are most of her follow-up statements. In the comment sections to her other tweets, people expressed their confusion over her apparent indecision regarding her political leanings.

“Your last two tweets are pretty confusing,” one commenter wrote. “It might be simpler & clearer to declare yourself an independent.”

She could more accurately declare herself a moron

Then what the hell was that about? Did you get hacked or something?

By the time morning hit, Rose McGowan was trending on Twitter. People are flocking to the trending page to shred the actress and activist. “Never go full Rose McGowan,” one commenter said.

It’s even become something of a reaction meme.

NOT A SINGLE, LIVING HUMAN BEING:

NO ONE'S ANCESTORS OR DESCENDANTS YET TO COME:

I want to know what crack Rose McGowan is smoking pic.twitter.com/qcTvtJj8Cj