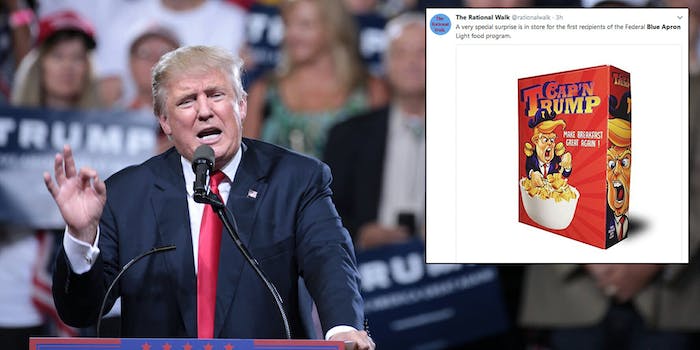 The change would affect millions of Americans.

The SNAP program, also known as food stamps, would be changed in the proposed budget by sending poor Americans who receive more than $90 a month in assistance boxes of food. The change would affect approximately 38 million people, according to CNN.

The box would contain items such as shelf-stable milk, juice, grains, cereals, pasta, peanut butter, beans, canned meat, poultry or fish, and canned fruits and vegetables and be valued at about half of a SNAP recipient’s monthly benefit.

“We thought it was a tremendous idea so what we do is propose that, for folks who are on food stamps—part, not all part of their benefits come in the actually sort of, and I don’t want to steal somebody’s copyright, but a Blue Apron-type program where you actually receive the food instead of receive the cash,” Mulvaney said on Monday.

Mulvaney also said the program would save the government money because they could buy the food wholesale.

The plan was criticized due to questions about whether the boxes would contain healthy ingredients and how poor Americans without a car would pick up the boxes.

On SNAP: This is absurd. The Admin wants to turn a portion of it into a delivery system, where the government controls what people eat, how much, and when they get it. This, in the name of "improving nutritional value" and reducing alleged "fraud." 3/ pic.twitter.com/xhgXmuJOrJ

Please to enjoy your DELISIOUS Blue Apron-style container of "Food 4 Poors" delivered to you courtesy of GLORIOUS LEADER Donald J. Trump. Celebrate the freshness of your canned meat, best served heated on engine block of car you live in. #MAGA!

Let's quit calling this Blue Apron style SNAP. This is a government ration box. They will get things like powdered milk, dried beans and peanut butter. Not fresh fruits, vegetables and meat.

I imagine Perdue and Mulvaney watching tv together and seeing a Blue Apron commercial and Perdue saying “Hey! Liberals love Blue Apron. And they love poor people. What if we replace food stamps with Blue Apron for poor people?”

Trump’s massive reshaping of SNAP would still need to be approved by Congress.