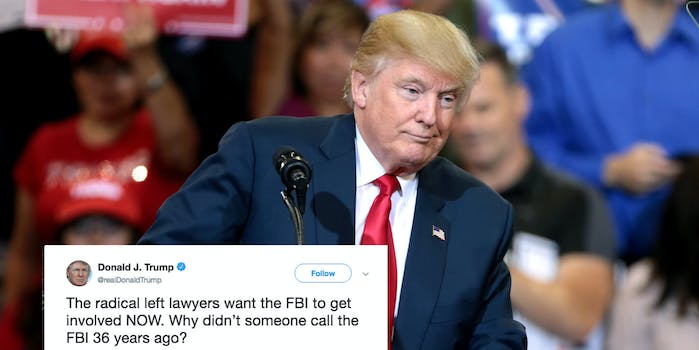 It's gone from the depths of the web to Trump's Twitter feed.

After Christine Blasey Ford’s allegations of sexual assault against Supreme Court nominee Brett Kavanaugh went public, it took virtually no time for the right-wing smear machine to start up.

This morning, it reached the president.

The radical left lawyers want the FBI to get involved NOW. Why didn’t someone call the FBI 36 years ago?

That Ford didn’t go to authorities immediately after the incident has been a point conservatives have been trying to make online in the week since the story broke, trying to paint the alleged assault as something that didn’t rise to the level of a crime.

Dismissing the allegations as minor has become a popular meme in the past few days, with numerous conservatives making joke tweets about Ruth Bader Ginsburg claiming she was groped by Abraham Lincoln. It’s a tactic that made its way all the way to Congress.

But it’s not the only way the right-wing machine has revved up to smear Blasey Ford.

Rumors, hoax stories, memes, and willful misunderstandings of her past emerged out of the far-right conspiracy swamps of Reddit, Twitter, and independent blogs.

How about Christine Ford get thorough background check done by FBI to see what kind of character she has? Can we get 65 People to come forward that have Known HER personally to attest to her impeccable integrity? Why was her Social Media accounts & Online Yearbook scrubbed? HOAX pic.twitter.com/ZqvbztQ00k

A few caught on and got enormous traction, garnering countless views and thousands of retweets—despite having no veracity. Some, such as an early accusation that Kavanaugh’s mother foreclosed on the house of Dr. Blasey’s (her preferred professional name) parents, thereby motivating her revenge, were quickly debunked. Then there was the bizarre doppelganger claim that percolated online last night.

But as the case has dragged on and gotten uglier, so too have the smears against Dr. Blasey.

Here are some of the most virulent and hard-to-kill from the past few days—many of which have national reach and tens of thousands of shares on social media.

Hoax: Dr. Blasey sent a letter accusing Supreme Court nominee Neil Gorsuch of sexually assaulting her to Senate Dianne Feinstein—a letter identical to the one she sent to Feinstein regarding Kavanaugh.

This claim attempts to paint Dr. Blasey as some kind of serial accuser of potential Supreme Court justices, but it appears to have been entirely made up.

It appeared on Sept. 18, originating not with a news outlet or journalist, but a vociferous conspiracy theorist and QAnon acolyte Josh Cornett. Attributing the information to “sources,” Cornett claimed “the accuser sent a similar letter directed at Judge Gorsuch last year” to “Diane [sic] Feinstein.”

The claim, which is attributed to "sources," appears to be this tweet from a Trump supporter, which has thousands of engagements. https://t.co/PuK1Q3njO5

Cornett followed his tweet with a second tweet claiming he had no idea if it was true or not, but was going to “report” it anyway because his “source” was reliable. The original tweet was shared over 7,000 times and was quickly picked up by far-right radio stations, Twitter accounts, and blogs. No less than Rush Limbaugh told his millions of listeners that it “rang true.”

No mainstream media source has found evidence of any such letter, and Cornett is infamous on Twitter for making up stories that inflate Trump and denigrate his foes. Cornett didn’t respond to a request for comment from Daily Dot, and blocked the author of this article on Twitter.

Hoax: Dr. Blasey is a rabid anti-Trump resister and prolific donor to Democrats, who clearly a deep grudge against the president.

A series of anonymously-created memes have carried these charges all over Facebook, Twitter, and Reddit. They accuse Dr. Blasey of giving large sums to the Democratic Party, marching at anti-Trump rallies, and being linked to far-right nemesis Fusion GPS, the lobbying firm that originated the infamous Steele Dossier.

All of these are false, inflated, or misinterpreted.

Dr. Blasey’s donations to Democrats have been limited to less than $100 between 2013 and 2017, according to publicly available data. A purported photo of her marching in the Women’s March holding a sign declaring “not my president” is a confirmed hoax, and her link to Fusion is a tenuous connection that involves her brother working at a law firm that Fusion hired to investigate Russian money laundering, a case completely unrelated to the Steele dossier.

Beyond that, Dr. Blasey’s brother left that firm in 2004, long before any of these investigations took place.

This is a typical accusation of the internet age, that someone “scrubbed” their social media because they don’t want their true nature to come out.

Is it possible Christine Blasey Ford waited so long to come forward because she was busy scrubbing her social media pages and online profiles? #DirtyPolitics

Sure enough, rumors started flying immediately that Dr. Blasey had removed anti-Trump posts from Facebook before sending her letter to Senator Feinstein. As usual, despite being unvetted, the rumors got picked up by everyone from mainstream sites like the Federalist to far-right blogs to conspiracy sites, with influential right-wing blog American Thinker rhetorically asking “What is Christine Braley [sic] Ford trying to hide?”

It’s not clear what, if any, social media presence Dr. Blasey had, other than a LinkedIn page, which is no longer active. Most mainstream outlets at least hedged their allegations by saying she had “apparently” scrubbed her presence, not bothering to investigate what it was.

It’s also not clear why taking herself off social media would invalidate her claims. If anything, it likely would have been the right decision for the safety of her family—as evidenced by the hysteria caused by negative reviews of a different Professor Christine Ford that appeared on a professor-rating site, itself an unreliable source.

Despite a long track record of being wrong, as well as several pending defamation suits, the right-wing blog Gateway Pundit has emerged as a leading source of “news” among conservatives.

On Sept. 18, Gateway Pundit printed a “bombshell” story alleging that Dr. Blasey attended high school with future Justice Gorsuch, which somehow lent credence to the rumor that she’d written a letter accusing him of sexual assault.

Christie Ford went to school with supreme court justice Gorsuch and in a developing story Christie Ford may have Previously made accusations against Gorsuch. So who’s next Ruth Bader Ginsburg oh no she’s One of them! https://t.co/mUUeN4oUhJ

The problem with the story is that it wasn’t true. Gorsuch attended the all-boys Georgetown Prep high school (the same school Kavanaugh attended) and graduated in 1985. Dr. Blasey attended the all-girls Holton-Arms School. It would not have been possible for them to attend the same high school, nor would it be relevant to her claims.

Sure enough, Gateway Pundit heavily modified the story, and while the URL remains the same, it was almost entirely re-written, replaced with a blanket story alleging “Christine Blasey Ford Has Record of Questionable Integrity – Kavanaugh and Gorsuch Went to Same School.”

This one is another right-wing blog hit job that got picked up by Gateway Pundit, Alex Jones, and others.

A yearbook purportedly from Holton-Arms School was posted by a right-wing blog called “Cult of the First Amendment,” and sure enough, it has references to wild times, drinking, costumes that would now be deemed racist, and raucous parties. The blog insinuates that since the school was so full of “drunken white privileged racist playgirls,” Dr. Blasey’s memories couldn’t possibly be reliable or useful testimony.

Thank you to the multiple people who sent me this. I don't know who wrote this, but it's an incredibly graphic & insightful look into Christine Blasey Ford's high school using school yearbooks and the pictures contained therein
No wonder they were scrubbed https://t.co/UkrHRRjEKA

Alex Jones took it a step further, insinuating that a picture of a girl in a skirt with her face covered was Dr. Blasey, who was a “hussy” and “captain of the sluts.” Of course, since the girl’s face is obscured, there’s no way to tell who it is, nor does it matter. But to the legion of followers that Jones carries, the yearbook is proof that she’s some kind of drunken tramp who made the whole thing up out of regret.

In a normal time, such a yearbook would be seen simply as evidence of a wealthy, sexually-charged atmosphere in the high schools of DC in the 1980s, where heavy drinking and casual racism were common. But there’s no indication in the yearbook that Dr. Blasey did any of this—and it wouldn’t be relevant to her claims if she did.

With Dr. Blasey set to possibly testify before the Senate Judiciary Committee next week, expect more smears and hoaxes to appear, attempting to sully her name and deflate the accusations that could wind up scuttling Kavanaugh’s nomination.