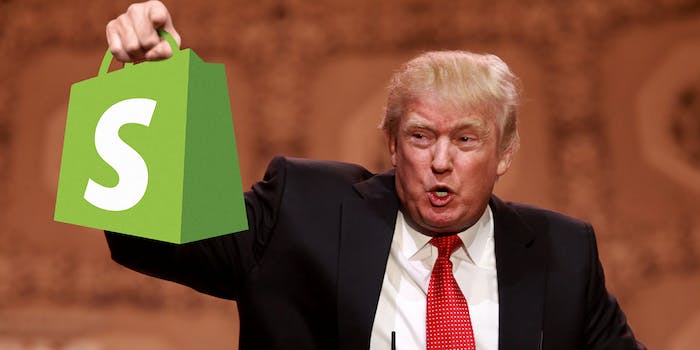 Trump uses Canadian company to sell ‘Made in America’ merchandise

A key component of Trump's 'Made in America' merchandise is literally un-American.

The Trump administration this month honored U.S. companies as part of “Made in America” week—but one key component was decidedly un-American.

President Donald Trump used Shopify, a Canadian e-commerce company founded by Germans, to sell “proudly made in USA” products on his website, the Daily Dot discovered.

Shopify is headquartered in Ottawa, Ontario, Canada, and was founded, in part, by German-born Tobias Lütke and Daniel Weinand in 2004. Lütke is also Shopify’s CEO. The company processed purchases from100 million shoppers in 2016, according to Fortune.

The source code for shop.donaldjtrump.com reveals that Trump’s official online store is using Shopify’s service. According to the Wayback Machine, Trump began using Shopify on Aug. 26, 2016, after migrating from a different, seemingly native, e-commerce service.

This revelation is merely the latest example of how Trump does not practice what he preaches. On Thursday, BuzzFeed reported that Trump’s private club in Palm Beach, Florida, Mar-A-Lago, asked the Department of Labor for permission to hire 70 temporary foreign workers under the government’s H-2B visa program and that the Trump National Golf Club in Jupiter asked to hire six more foreign cooks.

In a statement, the White House claimed that “for too long our government has forgotten American workers,” and pledged: “Under the leadership of President Trump, not only will the American worker never be forgotten, but they will be championed.”

Neither the White House nor DonaldJTrump.com immediately responded to requests for comment via email on Friday.

Shopify offers several packages, ranging from $9 per month for a service that allows customers to sell products on Facebook, to $299 per month for an advanced package. It is unclear which package is used to sell products on shop.donaldjtrump.com. Shopify did not reply to an email from the Daily Dot on Friday about the services it provides to Trump. A telephone call to Shopify went straight to voicemail.