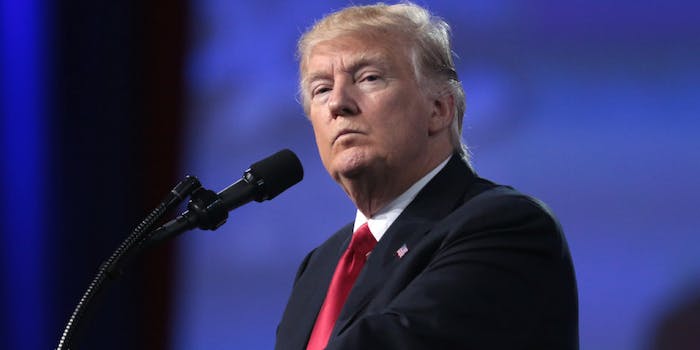 So far this year, Americans have suffered at least 90 mass shootings.

Hours after a man opened fire in a San Bernardino, California, elementary school, killing an adult and a child before taking his own life, President Donald Trump has issued no public statement on the violence—a silence some critics say speaks volumes about his priorities.

Police suspect 53-year-old Cedric Anderson of carrying out the shooting at North Park Elementary, which left his estranged wife, Karen Smith, 53, and an 8-year-old student in her special-needs class dead. A 9-year-old student was also injured by gunfire during the shooting and is in stable condition, according to police.

The North Park Elementary shooting evokes memories of two other recent tragedies: the December 2015 terrorist attack in San Bernardino, which left 14 people dead; and the December 2012 Sandy Hook Elementary shooting, which claimed the lives of 20 young children and six adults. Likely because of these details, this mass murder has risen to a level of media visibility not seen by many other equally deadly tragedies across the U.S.

It is the location of the crime and the demographics of the victims—not their number—that make Monday’s shooting stand out.

Sounds like the San Bernardino killer today doesn't pass Trump's "Is he Muslim enough to comment on this?" test.

The only one more silent than the NRA about the San Bernardino shootings is Donald Trump. Sad.

The fact Trump, who had a twitter beef w Snoop Dog, has yet to comment on lives lost @ the San Bernardino school shooting speaks volumes.

Why hasn't Trump said a word yet about the San Bernardino shooting?

In the soulless, black-and-white world of government definitions, Monday’s shooting qualifies as a “mass killing,” according to a federal statute, which defines such an incident as “three or more killings in a single incident,” but it falls just short of the FBI definition, which the bureau describes as “four or more shot and/or killed in a single event [incident], at the same general time and location, not including the shooter.”

Using the FBI’s definition, the Gun Violence Archive, a non-profit that tracks gun-related violence, counts 90 mass shootings so far in 2017, 74 of which have taken place since Trump’s inauguration on Jan. 20. Two such shootings took place on Inauguration Day itself, and the most recent deadly mass shooting prior to Monday, which took place on Friday, April 7, in St. Paul, Minnesota, left a father and his two daughters dead, the mother of the family shot, and a baby kidnapped.

President Trump has not commented publicly on these tragedies either, nor would it likely be possible for him to do so given their dismal frequency. Privately, however, the Trump administration did offer assistance to San Bernardino, whose mayor, R. Carey Davis, told the New York Times that Trump offered to help “in any way possible.”