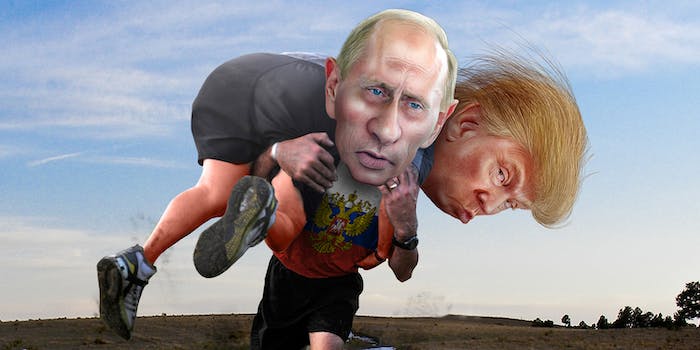 The Trump–Russia controversy: A glossary

From 'dossier' to 'recuse,' here are the terms you need to know.

President Donald Trump and Russia are set to dominate headlines for the foreseeable future.

So, what’s behind all this Trump–Russia business? From Trump’s embrace of Russian President Vladimir Putin to members of his campaign standing accused of having repeated contacts with Russian officials, it’s clear that he’s taken a remarkably different approach to the president has taken a different approach to the country than past American presidents, to say the least.

Since the Trump–Russia universe is sure to remain a topic of endless discussion, we’ve compiled a glossary of key phrases, concepts, and players to help you untangle the controversy that just never seems to end.

Adviser: A person who provides advice and experience. In the case of the Trump campaign, everyone from Jeff Sessions to Jared Kushner served as some type of adviser. And, as of March 3, at least five Trump advisers reportedly had contact with Russian officials.

Carter Page: A campaign adviser on Trump’s national security committee who along with J.D. Gordon spoke to Russian ambassador Sergey Kislyak at a conference related to the Republican National Convention back in July 2016. Page is a Ph.D. and a former Merrill Lynch investment banker in Moscow who also runs a New York consulting firm, Global Energy Capita. While in Moscow, Page worked on key transactions for Gazprom, RAO UES, and other state-backed oil companies. Page is reportedly being investigated by the FBI for his extensive oil industry contacts in Moscow. He has advised Trump on oil and gas and Russia.

Cyberattack: An attempt by hackers to infiltrate or destroy a computer network or system. Cyberattacks can be used to steal or alter information or render a system immobile. The U.S. intelligence community has accused Russian intelligence of carrying out cyberattacks that led to the theft of emails from the Democratic National Committee and Hillary Clinton’s campaign manager, John Podesta.

Dossier: A collection of documents pertaining to a specific subject. In January, BuzzFeed News published a 35-page bundle of files containing uncorroborated allegations that the Russian government possessed blackmail-worthy information about Trump. The dossier was compiled by a former British intelligence officer named Christopher Steele who was tasked with gathering opposition research on Trump by Republican opponents and later on behalf of Democrats. The dossier contained highly explicit details about Trump. Putin went on to dismiss the dossier as an “obvious fake,” criticizing those who ordered its creation as “worse than prostitutes” with “no moral limits.” NBC News reported on March 2 that the Senate Select Intelligence Committee is currently considering calling in Steele for questioning.

Envoy: An ambassador or representative on a diplomatic mission. As U.S. ambassador to the United Nations, Nikki Haley can also be considered America’s U.N. envoy. Sergey Kislyak is Russia’s envoy to the U.S.

Jared Kushner: As Trump’s son-in-law and senior adviser, Kushner has played a substantial role in the Trump White House’s foreign policy, including participating in a meeting with former National Security Adviser Michael Flynn and Russian Ambassador Sergey Kislyak at Trump Tower. Kushner, 35, is married to Trump’s daughter, Ivanka, and is the principal owner of Kushner Industries, a real estate holdings company, as well as Observer Media, which publishes the New York Observer.

Jeff Sessions: Now attorney general of the United States, Sessions served as a U.S. senator from Alabama for three decades. He was the first sitting senator to endorse Trump’s presidential bid and later became chairman of the campaign’s National Security Advisory Committee. Sessions recently recused himself of any investigations into the Trump campaign’s ties to Russia after reports revealed he had falsely stated during his January confirmation hearing that he never met with Russian officials. In fact, he met Russian Ambassador Sergey Kislyak on two occasions.

J.D. Gordon: Gordon served as the director of national security of Trump’s D.C. policy office during the campaign before he quit. Gordon along with Carter Page spoke to Russian ambassador Sergey Kislyak at a conference related to the Republican National Convention back in July 2016.

Kremlin: Means “fortress in a city” in Russian, and can also refer to the government of the Russian Federation. The actual Kremlin is a fortified complex in Moscow that contains five palaces, as well as the residence of Russian President Vladimir Putin.

Paul Manafort: A former Trump campaign chairman, Manafort was paid over $12.7 million in cash for consulting for Ukraine’s pro-Russian ruling party. A gifted delegate, manager, and legendary Republican operative, Manafort has served on the campaigns of every Republican president since Gerald Ford.

Perjury: The act of willfully lying or telling an untruth under oath, usually while testifying in a courtroom or to Congress. Democrats such as House Minority Leader Nancy Pelosi (D-Calif.) accused Attorney General Jeff Sessions of committing perjury due to his statement that he had no contacts with Russia during his confirmation hearing although that is not strictly true.

Probe: A colloquial term for an investigation or careful examination of something, such as the FBI’s probe into Hillary Clinton’s email use at the State Department. The FBI is also conducting a probe into the Trump campaign’s alleged ties to Russia.

Recuse: This means to take one’s self off of a case, usually due to conflicts of interest or other issues relating to the case. Following reports of meeting with the Russian envoy to the United States, Attorney General Jeff Sessions vowed to recuse himself from investigations of Russia’s possible ties to the Trump campaign. Usually, after discovering a conflict of interest or lack of impartiality, an attorney general who recuses himself or herself from a case will no longer have ownership or oversight of it in any way. Instead, a special prosecutor will be appointed to be in charge of the case.

Rex Tillerson: The secretary of state and former Exxon-Mobil CEO has deep business interests in Russia. Tillerson was criticized by both Republicans and Democrats for his close personal ties to Russian President Vladimir Putin, who awarded Tillerson an Order of Friendship in 2013.Tillerson in 2014 personally lobbied the White House in protest of sanctions on Russia, according to Bloomberg. In Senate confirmation hearings, Tillerson hinted that a different approach may be needed for Russia and that the nation may be willing to work with the U.S. in fighting ISIS.

Sergey Kislyak: Kislyak is Russia’s ambassador to the United States, a position he has held since 2008. Some sources accuse Kislyak of being a spy and recruiting spies, but that has not been confirmed. Communicating with Kislyak before the election lead former National Security Adviser Michael Flynn to resign in February as well as Attorney General Jeff Sessions recusing himself from investigations of Russia. Kislyak has represented Russia for nearly 40 years in a variety of capacities, including in Washington, Brussels, and the United Nations.

Wilbur Ross:  Commerce Secretary Wilbur Ross is a billionaire investor who has served as vice-chairman of the Bank of Cyprus, a key off-shore bank for illicit Russian funds, since 2014. The White House has been accused of blocking information on Ross’ links to Russian oligarchs and current investors in the bank, which include long-time allies of Putin, according to the Guardian.