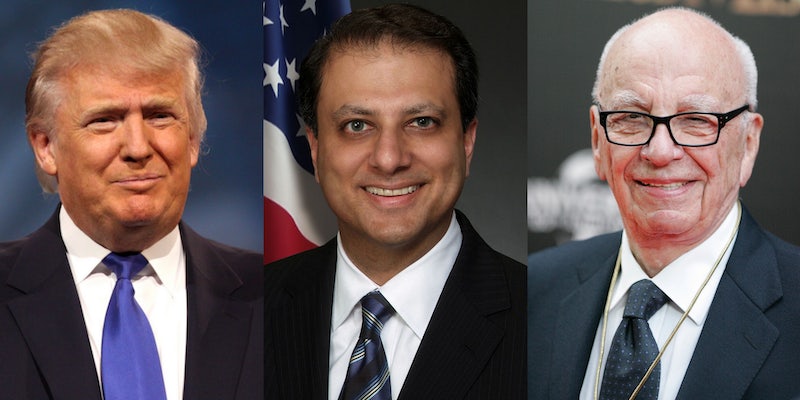 Former U.S. Attorney Preet Bharara of the Southern District of New York, whom Trump fired on Saturday after he refused to submit his resignation, was in the midst of a federal investigation of Fox News. President Donald Trump in November told Bharara, an Obama administration appointee, that he would keep his job. The Department of Justice on Friday reversed course, asking for Bharara’s resignation along with 45 other federal attorneys.

I did not resign. Moments ago I was fired. Being the US Attorney in SDNY will forever be the greatest honor of my professional life.

Sherman’s information is based on conversations with multiple unnamed sources. The reporter’s extensive investigations of Fox News has led to a number of scoops that later proved accurate. Sherman previously reported that Ailes used company funds to spy on journalists.

Allegations of illegal spying at Fox News would not be the first for a News Corp. company. Employees at News Corp. Chairman and CEO Rupert Murdoch’s British newspaper company News International engaged in phone hacking and other criminal activities, which led to multiple arrests and convictions.

Trump is a known fan of Fox News and regularly promotes it as a superior source of information. The president has also incorporated information taken from Fox News into his speeches and tweets, and he has made regular appearances on the network’s morning show, Fox & Friends.

Congratulations to @FoxNews for being number one in inauguration ratings. They were many times higher than FAKE NEWS @CNN – public is smart!

The New York Times reports that Marc Mukasey is among those under consideration to replace Bharara. The son of former Attorney General Michael Mukasey, who served under the Bush administration, Marc Mukasey is Ailes personal lawyer.