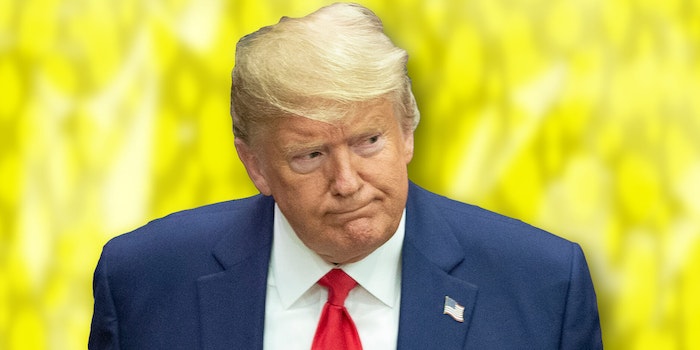 What’s going on with this super-realistic Trump pee tape floating around?

It keeps cropping up on Twitter and file-sharing sites.

Last night, Slate’s Ashley Feinberg published a fascinating and detailed breakdown of a tape that on its surface seems to be a fairly convincing recreation of (or is) the infamous and alleged Russian pee tape involving President Donald Trump.

In the wake of Trump’s 2016 election victory, BuzzFeed published an opposition research dossier that was floating around intelligence circles, part of which claimed Trump was filmed with prostitutes who urinated on a bed in Moscow that former President Barack Obama once slept in. Trump denied it, asserting his germophobia, but it’s long been speculated (or, more accurately, the subject of wishful thinking among media) that a tape of such existed.

But that hasn’t stopped a version of it from occasionally popping up on Twitter and file-sharing sites.

Feinberg meticulously tracks the history of it in her article. But the bulk of her work consists of the analysis of the tape, which she concludes probably isn’t Trump, but most likely was filmed in the Moscow Ritz-Carlton Trump stayed in when he was there in 2013, or an absurdly detailed recreation.

However, according to Feinberg, it seems like the tape was filmed after the presidential suite at the Moscow Ritz-Carlton was renovated, which would have been after Trump went there for the Miss Universe pageant when the allegations are likely to have been taken place.

Feinberg concludes it could be an effort by groups loyal to Trump who want the media to run with the fake tape.

Interestingly, Feinberg bases a lot of her analysis of a video Stephen Colbert made, where he visited the suite for a bit well before this video started circulating in 2017.

After his visit, Colbert declared that the “pee pee tape is real.”

In her piece, Feinberg concludes “Someone made this video and most likely recorded it in a hotel room that costs about $18,000 a night. Was it all for the sake of feeding rumors, or for confusing everyone, or for tricking some overconfident journalist into the ultimate feat of Fake News?”

But at the same time, if Colbert went there, it seems just as plausible that he filmed something for a bit that never aired, and someone shared the footage online.