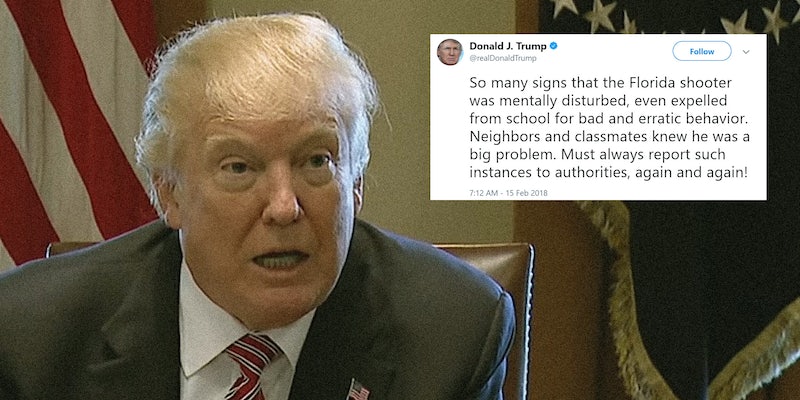 This did not sit well with many.

In a week in which the president sided with men accused of sexual harassment and domestic abuse, Donald Trump still managed to hit a new low in victim blaming Thursday morning whenhe called out the students at Stoneman Douglas High School for not reporting the former student who killed 17 people yesterday.

(The tweet was threaded with a tweet from yesterday about DACA, which may have been an accident.)

Trump’s decision to place the onus to stop shootings on the citizens who were just terrorized—and not say, the weapons involved in the massacre—did not sit well with many.

Hello 911? I'd like to report an emotionally disturbed young man with behavioral issues who owns an entire arsenal of semi-automatic weapons and posts crazy stuff online

911: none of that is illegal or an emergency ma'am

Ok, but the President said

Trump laying the onus on the students, not members of Congress, to help prevent the next school shooting https://t.co/m56tNKDUjJ

he was expelled from the school. his mother while she lived frequently called the police to talk to him. the "authorities" knew. the "authorities" are unwilling to take remedial action because they are in the pay of the gun lobby. https://t.co/jg5rBX1nG0

Despite talking about warning signs of mental illness, almost immediately after he took office, Trump signed into law a bill rolling back Obama-era regulations aimed at making it harder for those receiving government assistance for mental health problems to get guns.